On our way from Edgefield to Bissett, somewhere along the way, we passed an RV -- a compact little house on wheels –- which had a slogan painted on the back: Some Day Came. I only caught a glimpse of the couple (a good thing since I was the driver), who looked youngish for retired, but who am I to judge?

I liked the slogan; it reminded me a little of the names people give their beach houses at Pawleys and Litchfield. I’m happy for that couple that their some day -– some day I want to have a camper and just hit the road – came. Whatever it took, I’m glad.

Today we had a little “some day.” Since the first time I saw a map of the part of Family Lake Shining Falls uses, I’ve been intrigued by one location pretty far to the north. Beer Can Alley. At some point during each visit I’d say, “Someday I’d like to motor up there.”

Well, today some day came. We set out immediately after finishing breakfast. The water was still smooth, so the boat felt as though it were gliding, almost levitating. Twice we stopped to consult the map and each time we were enchanted by the symmetrical wake spreading evenly on either side of the back of the boat, the surface of the water not breaking, just rising and falling outward and outward. We found Beer Can Alley without incident (always a relief …), a narrow, quiet, meandering stretch of water with a high rock formation on one side and a wide, flat marsh on the other. In actuality there wasn’t much to see. But, I have to say that we did see a beer can floating up against the reeds. It has its name for a reason, I judge. 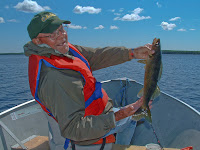 For the remainder of the day we fished – back at McKay Bay. Very successfully. In fact, Tal’s first eight casts produced eight walleyes. He looks pretty happy doesn’t he? (Getting him to smile for the endless fish pictures takes some cajoling.) 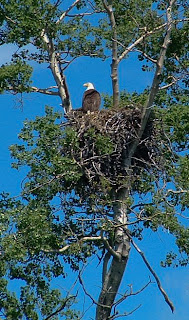 We ate lunch in McKay Bay and then set out for one last pass through Tal’s Channel and a couple other favorite spots. Including taking a peek at the eagle’s nest. Earlier in this visit we could see the chicks (eaglets?) in the nest, but today we were treated to the sight of a very large parent presiding over home.

As we were preparing for this trip, I told Tal that I expected that we would have nine perfect days here, but that one of them would be exquisite. Today turned out to be that day. It was clear from twilight to twilight, long sleeves were still comfortable, the water was never rough, the fish were cooperative, a light breeze kept the mosquitoes away. And, tonight as I write this, the door to cabin four is open and I can hear loons calling, one relatively close and the other more distant. There may be no more plaintive sound in this world. Going to sleep with that particular music drifting to my ears is a perfect ending to an exquisite day.
Posted by Janet Tarbox at 09:51