On mowing the lawn

As has become our custom this summer, Tal and I rise very early on mowing day in order to finish our work before the summer heat gets its daily grip on the landscape. This morning, while the early temperature was lower than it has been of late, the humidity was extraordinary, the dew so heavy that the decks, steps and sidewalks were wet and the downspouts ran with water coming off the roof. It was the sort of humidity that made breathing itself a noticeable chore.

Although our riding mower has at last been repaired -- the belt that runs the blade reattached and the deck leveled (sort of), I chose to walk behind the small mower, leaving a 19" swath of short grass in my wake, pass after pass. It's a meditative exercise, actually -- a "one foot in front of the other" plodding, uncensored thoughts slipping unto consciousness as, watchfully, I keep the front edge of the mower aligned with the ever so satisfying just cut row.

Today as I worked at outlining the edges of the back yard I became aware of an oak leaf on the grass toward the middle of the area I was cutting. My first thought was to get a photograph. My next thought was to self-scold -- a rather long and harsh "conversation." You need to get this job done, Janet. Stopping the mower means restarting it ... This is mowing time, not camera time. You get the idea.

Round and round I went -- on the grass and in my mind. It wasn't until the last possible instant, when one more step would have put the mower over the leaf, that I stopped walking and released the hand grip that cut the engine, the sudden silence somehow intensely loud.

Then it was across the lawn up to the house, into the garage, off with the wet, grass-covered shoes, through the house for the camera and tripod -- and back again. The result isn't great, but it's pleasing enough, I think more for the fact that the taskmaster in me didn't win for a change than for the image itself. 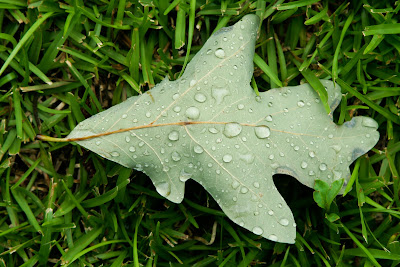 I had a spiritual director once who told me many times during the years that we talked together that what captures our attention is important. A slant of light through trees, the music of a mountain stream, the fringe of a baby's eyelashes against its cheek, the sound of a winter wind around the eaves of the house ... It is those things -- and millions and billions of others if we're paying attention -- that whisper to us something of the divine, that give us hints of the eternal.

For me today it was mowing the lawn and a single leaf spotted with beads of heavy dew on the wet grass.
Posted by Janet Tarbox at 12:13 No comments:

The tools you need

It has been months since I last posted to Meanderings. There are many reasons for that, which over time I will likely address, but for now let it suffice to say that I am back. Today is a rather significant day, my father's funeral having been two months ago yesterday. It's a hot June morning, the kind of hot that almost squeezes the life out of a person. Despite that, however, I feel as though, in some strange way, I am beginning to live again. This essay was originally written for the June edition of a newsletter published by the Episcopal Diocese of Upper South Carolina for retired clergy, "From Friends to Friends."

I am grieving the death of my father. It is a time of conflicting emotion which I know will go on for a long time. Even as I have made my way along sorrow’s path since late April, however, I am finding the expected sadness to be tempered wonderfully by unanticipated and unbidden memory. One instance in particular seems to be intent on claiming sustained attention from me. With over twenty years having passed since the actual encounter on a Saturday afternoon, the date long forgotten, I am pleased and strengthened to be discovering new meaning in an old story.

It happened when I was visiting my parents for the weekend. I was involved in a divorce at the time and recently had moved into my first apartment. One of the things I had “inherited” for my new place was a small bistro table and four cane-bottom chairs for the tiny dining area at the end of the kitchen. Over our Friday night dinner I had entertained Mom and Dad with the tale of my trying to reassemble the table without any tools. My first attempt at a meal seated at that table was a wobbly one. The table leaned; the table gyrated. We all laughed at the story, agreeing that seldom does anything go right the first time.

After breakfast the next morning, while my mother and I visited and accomplished her usual Saturday morning tasks, my father disappeared into the garage. At lunchtime he reappeared – and not empty handed. With gentle ceremony he presented me with a red metal toolbox. When I opened it my eyes beheld a variety of tools, from a couple of hammers and several screwdrivers of varied sizes and type to a set of wrenches and a hand-crank drill. I was touched, needless to say, and delighted. My own toolbox. Dad downplayed the gift, telling me that none of the tools were new, that they were extras he didn’t use any more. I was still delighted and he was obviously pleased with himself.

At the end of the weekend I returned to Columbia – and successfully shored up that table! It was also during that week that I told my therapist, David Stewart+ (God, rest his soul) about what my father had done, about the box of tools I’d brought back to my apartment with me from that visit. David’s response was simple, direct and true: “Your father has given you the tools you need.” I got it; David didn’t have to explain. That statement was true about the heavy, brightly-colored box of tools, AND that statement was also true about my having been given – over the course of my childhood and youth – what I needed to know about getting on with my life.

Since Dad’s death and with this memory having come to the fore, I have to say I’ve come to understand another way of appreciating that gift of a tool box. Dad did downplay his gesture, wanting me to understand that what he was giving me was from among a large collection. He not only had his own tools, he also had those of this father and his uncle. To give me a tool box to use in my new apartment (and in the ensuing years; I still have the toolbox) he only had to walk out to the garage. No purchases were required; it was all right there in his workshop. To allude rather loosely a line from a prayer I used at Dad’s graveside, Dad lost nothing in that act of giving.

As I begin moving into the phase of my life I’ll live without my father and as I mine that toolbox memory, I am coming to realize that it’s not so much the toolbox as it the workshop that’s ultimately important here. A metaphorical workshop, mind you. The workshop – containing tools – being represented by me.

I wonder about what’s bountiful and extra in this workshop. And, I wonder how well and to whom I’ll give that extra away.
Posted by Janet Tarbox at 09:37 No comments: