Well, I don't know if the title of this brief post is spelled right, but it's pronounced yee-ouuu-ch!!! and describes pretty well sudden pain and verbal response.*

Two terms should help you get the picture: lawn mowing and ground bees. Luckily, I was in the back yard and not working on the shoulder of Country Club Road, as the sweaty blue jeans had to go -- and in a big hurry.

After some self-doctoring I went back to the mower (having retrieved the jeans, you'll be pleased to know) with my Sure Shot toting Tal walking along next to me watching for evidence of the yellow jacket hole. It didn't take long to find it, but "they" also found us equally quickly, delivering a couple stings to each of us. Tal doused the hole and went back to weed-eating. I finished the lawn.

Generally, after a morning of yard work we have a few aches and pains to remind us of our satisfying efforts. Today's extra pain amounts to several I'd be just as happy to do without on lawn mowing day next week.

Several weeks ago a friend passed along a book he thought I might like to read, given my vocation as priest. It took me some time open the front cover and get underway, but I'm now three-quarters through and thoroughly enthralled. Horrified, but enthralled.

The Last Divine Office: Henry VIII and the Dissolution of the Monasteries by Geoffrey Moorhouse is less about the history of the suppression and dissolution of the monasteries than it is about the state of monasticism on the eve of and during the English Reformation. Despite the fact that to make it through the chapters I have to have a dictionary at my elbow, I am coming away from the book's content with two distinct lines of thought which will stay with me for some time.

First, after the initial round of property seizures and, of course, the wealth associated with them, Thomas Cromwell and the king realized that coaxing those in the religious orders into surrendering their houses was less messy and helped them (Cromwell and Henry) avoid the charge of violent force. In a few cases those who gave up willingly were then allowed to continue their monastic lives, under authority of the king rather than the pope. One such instance was at Durham, my favorite of the English cathedrals.

I wonder what would have happened if Cuthbert Tunsall, Bishop of Durham, and the monks under him had resisted turning the monestery and cathedral over to Henry. Would that magnificent space have green grass for a floor and blue sky for a ceiling like so many of the other religious ruins across the English countryside? The other side of that coin, of course, is the fact that the deciding to give in for self-preservation's sake likely came at a terribly high personal price, costing nothing less than integrity. Where does flexibility end and abject capitulation begin?

Second, is the extraordinary (it seems to me) violence of the era. Even while I marvel almost daily at how cruel humans can be, this book has found a way to disturb me. The idea was the imposition of "demoralizing fear" throughout the realm in order to keep everyone, locals and the religious alike, in line, to "demonstrate that royal power was ultimately superior to all other forms of authority." (189) When Cromwell and Henry decided to make an example of someone, what an example it was.

What I'm reading in The Last Divine Office, however, is not unlike life as described in Pillars of the Earth by Ken Follett and other historical novels like it. Human life did not seem to hold the same worth we seem to grant it today, although I suspect we -- American citizens of my ilk -- are somewhat shielded from the truth of the matter, if by nothing more than the American myth of being a peace-loving people. But, I do marvel at the thought that any given infant can evolve into a brutal torturer. When does it happen? How does it happen?

So, why am I continuing to read? Well, because it appears I have to. Not reading it wouldn't make it any less true. Not reading it would deny me this particular chance for self-examination. And, in a passage from earlier in the book describingthe time during the suppression and dissolution prior to the transfer of Durham to the king's control this quote keeps me turning pages and looking up words:

So the monks of Durham carried on the traditions of their house, blending the busyness of practical necessity with the stillness of prayer and meditation, in a paradox of vibrant tranquillity. (150)


No matter what is happening all around the globe, life does go on. I have to work to remember that simple and difficult fact. If I can somehow be vibrantly tranquil and "quietly purposeful" (150) as I go about my local, personal routine, perhaps I will discover and keep discovering my own power to interject both tranquility and purposefulness into the muddle.
Posted by Janet Tarbox at 23:26 No comments:

Labels: "Pillars of the Earth", "The Last Divine Office: Henry VIII and the Dissolution of the Monasteries", Durham Cathedral, Geoffrey Moorhouse, Ken Follett

A trio of Thursdays

It has been said, generally tongue-in-cheek, that doing something more than once constitutes the beginning of a tradition! So, Thursdays ... a trio of them to date. After today I wonder if I can count on Thursdays to be set apart in some way. I hope so, but only (to quote Jon Luk Picard of Star Trek: The Next Generation) if I make it so. 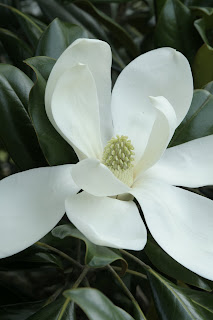 It all began on the 17th of July, a day on the calendar with nothing written in the square. Despite the oppressive heat our part of the country was enduring at the time, early in the week we proposed a field trip on that attractive unclaimed day and for several days we tossed around ideas of what we might do. By Wednesday evening we had settled on Redcliffe Plantation, a state historic site near Beech Island -- a drive of about an hour south of Edgefield, and a place associated with Tal's late wife's family. It was hotter than the hinges of hell, I promise, and I don't particularly like any of the photographs I made of the house and grounds. But, the magnolia grandiflora was in magnificent, fragrant bloom and I have several shots which pleased me, especially since the white balance was about right for a change. Thursday #1.

Early the next week I was invited on a field trip by a friend from the Art Association of Ridge Spring to photograph at a wonderful -- and ambitious -- location called the Daylily Depot near Ridge Spring in rural Saluda County. We settled on June 24th and it turned out to be a gorgeous morning. I had decided in advance to shoot macro and was delighted with how still the early morning was. As the sun rose and the temperature began to climb, however, a luscious but troubling breeze from across the cotton field began a lifting and swaying of the flowers and foliage that shifted my focus. 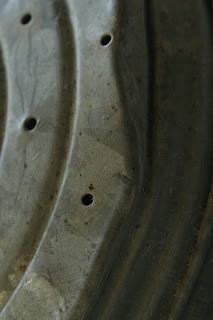 Kathy Eyster, a photographer from whom I took a class in macro photography at the annual photography retreat at Kanuga, taught us early in our breezy, and initially frustrating, week together during April 2009 that not all macro photography has to be of flowers. When the wind blows, she told us, one needs to consider photographing something that doesn't move. Now, why didn't we think of that? Fortunately, I did remember her advice, looking at garden sculpture, the depot itself and even a watering can's dented rose. Thursday #2.

Although today, Thursday #3, did not include camera work, the morning was extraordinary. Tal and I rose extra-early and were at the Vannland pond before dawn -- rods, reels, tackle boxes, insect spray at the ready. We caught and released fish to our heart's content. But, the real attraction was the location and simply being there. What could be better than the sight of an eagle soaring over our heads in the brightening sky, a beaver swimming across the pond in advance of the sunrise, the sea of tiny yellow flowers blooming on the surface of the pond at the water's edge?

I write about these Thursdays because they are powerful experiences that give my life extra meaning, adding to the ordinary cycle of yard and house work, of all the responsibilities I tend to make too hard and too heavy. Last fall on a whim I bought a book by Julia Cameron entitled "The Artist's Way: A Spiritual Path to Higher Creativity" (Tarcher, 2002). Then, a month later I actually dipped into the book and began the 12-week program.

Part of it was easy, especially writing the morning pages -- three pages every day no matter what. I can count the number of days I've failed to write during the past seven months on a single hand. Another essential requirement, the weekly artist's date -- solitary time, free time, frivolous time, however, was almost impossibly hard. During the initial 12 weeks I might have managed something that I could in good conscience call an artist's date maybe five times. Seeing the Ansel Adams exhibition at the Columbia Museum of Art, for example, or cloud-watching, for another. The task oriented part of me talks its way out of artist's dates with persistent determination and remarkable skill.

Each of the past three Thursdays would most certainly qualify as an artist's date. It appears a habit may be forming. Or a tradition. July 8th is coming up, a mere six days from now. I'll let you know what happens.
Posted by Janet Tarbox at 21:56 No comments: