I knew what day it was; I knew to be on the lookout. Luckily, when a small plane arrived just before dark last evening and, as always, I had to move to the window to witness the landing, there it was – the almost full moon. I’d almost missed it. Setting up the tripod on the deck took only a moment. I’m getting a little faster with practice. 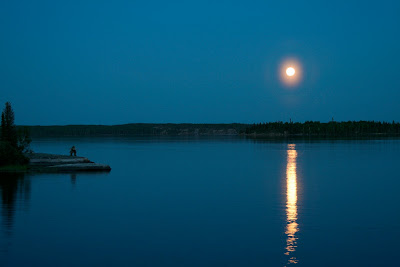 Of course, I’ve heard about how to “get” an accurate full moon photograph. Make one shot metering what’s left of the light and, without moving the camera at all, take a second metering on the moon. Then, merge the two images. A second scheme is to take the first shot at 55mm, make a second photo of the moon with a telephoto. Putting the larger moon in the first photograph ensures ending up with the moon in the finished product looking as large as it did in person. Otherwise, you end up with a photograph like this one. Pretty accurate for everything but the moon, which is completely featureless and decidedly smaller than it seemed as it rose.

The mosquitoes were beginning to chew, but a turn to the right of about 120 degrees gave me a striking view of the lodge with the plane at the dock. This photograph, though darker in this post than in the Elements organizer, actually does that scene some justice. 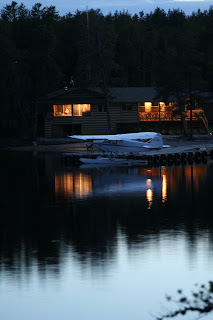