The longest day of the year

Last year on June 21st, the first day of summer 2006, Tal and I were on the water pre-dawn awaiting a photo op with the rising sun. Not today. It was cold! The fire in the stove when we went to the lodge for breakfast was as welcome as the steaming mug of coffee. I’ve worn none of the short-sleeved shirts I brought with me on this trip and today, even as the calendar marks a change of season, was not the day to start.

As we made our way back to the cabin after breakfast, we were given a rare treat. A pair of loons was right off the main dock, diving and resurfacing, sometimes together, sometimes singly, the one up alone clucking softly, but persistently, as he or she looked for its mate. I don’t have focal length enough to get a good photograph, but I tried anyway. 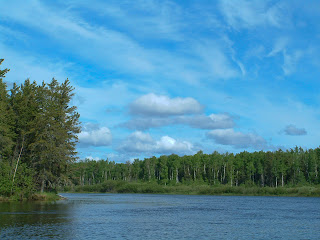 Then, it was back to the river where the fishing continued to be good for another several hours. This is a shot taken from Myron’s Current looking toward the falls, which I had to wait to take until the wind calmed significantly. For a time we watched whitecaps breaking toward us, that is, breaking upstream. Sort of odd to watch.

A quite afternoon in the cabin for naps and reading and yet another delicious supper in the dining room prepared us for a good-bye ride to Spring Fever Bay and an hour of (more) good fishing.

We came in early, yet again given the looks of the weather – which made for a rather dramatic sunset on the longest day of the year. So last year, a sun rise and this year a sun set. 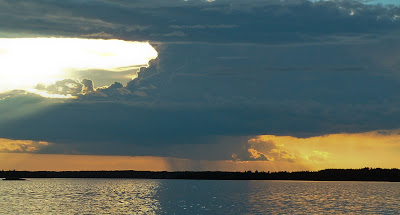 It is amazing tha amount of water flowing out of the lake and going over the falls. The water is fast moving at "Myron's Current", yet somehow the walleyes navigate to the lure. Fishing not as good here when water levels are high.