Bissett, almost any way one looks at it, is the end of the road, a road which deteriorates with every passing kilometer (119 in all) after leaving Power View, the last 47 kilometers being a combination of gravel and dirt – which is worse now than it was on our first trip to Shining Falls Lodge five years ago. But, in those five years life in Bissett has improved.

The line goes like this: "There’s gold in them thar hills." Actually, there’s gold under the swampy western end of Rice Lake. The original gold mine opened in 1914 and long ago played out. Like oil, I suppose, the easy-to-get-to gold was gone. A new company, the San Corporation, somehow knew where else to look and had the wherewithal to take that look. Below is a view of the gold mine buidings with Bissett's lakeside park (here Tal and I had our picnic) and the floatplane base in the foreground.) 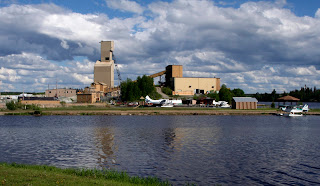 From outward appearances not much has changed in Bissett. But, there is a livelihood and a sense of prosperity that was missing before. When the gold runs out this time? Who knows. I would suspect, skeptic that I am, that things will go back to the way they were before the mining operation was restarted. The current news is that a new vein has been opened with more workers needed, so no one need consider that “what then” question just yet.

In the late afternoon Tal and I walked to the park at the lake to eat our picnic supper of leftovers from the travel cooler. And, hours later we walked back to see the sunset, the official time for that being 9:37. It says a lot about us that we were making ourselves stay up! As usual, it seems, the weather was of primary concern, but the impending storm offered drama for photographs. We were safely back at Northern Wings, the B&B where we stay, when the rains finally came just before dark. 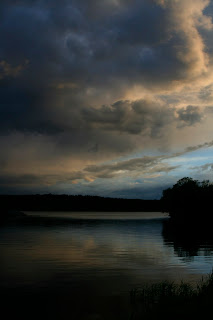