I woke up this morning with a hymn on my mind. Hail thee festival day, blest day thou art hallowed forever. As we walked back to our cabin after breakfast, Tal commented that I was humming it. And then later, when we were back at Walleye Wall (so good was the fishing yesterday), Tal complained -- somewhat emphatically -- that he couldn’t get it out of his mind. Oh, the power of suggestion, I suppose. 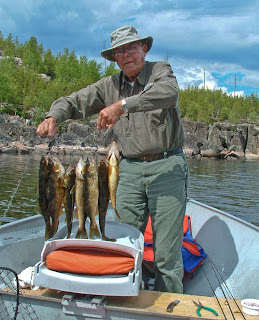 At about 11:30 we had a stringer of eight fish all between 16 and 17½ inches long. A storm which we were beginning to hear, but couldn’t see, was forming. So, a hasty photo of our catch and we were off at full speed toward the lodge. We made it to the main dock and handed off the stringer to Jonathan, back to our dock and unloaded the boat just in time to stay dry.

Large and slow-moving, this storm packed a wallop: driving rain, slanting from the north, for 10 relentless minutes; just as the lightening and thunder became simultaneous, a bolt of lightening struck the point of land directly across the little bay from cabin four, felling a tree, and marble-size hail began to pelt the landscape. Twenty minutes later, the ground covered with ice, the hail stopped, the rain resumed and lasted for another hour.

Tal thinks I should be more careful with the choice of tunes in my head.
Posted by Janet Tarbox at 19:27