With five previous trips to Shining Falls Lodge behind us, so gorgeous was the weather after breakfast that Tal and I struck out into new territory. Leaving behind the known, the tried-and-true fishing spots – mostly to the south of the lodge – was something of a leap. But, we headed north to McKay Bay, where to our relief and delight there were fish!

Given the vastly improved weather, we stayed out several hours longer than in previous days, eating our lunch on the shore of an island in the bay. These are two views from our lunch spot – one to the north, the other to the south. (Yes, the gooey yellow stuff between the boat and the rocks IS pollen.) 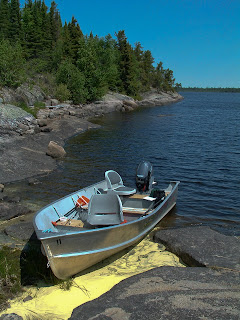 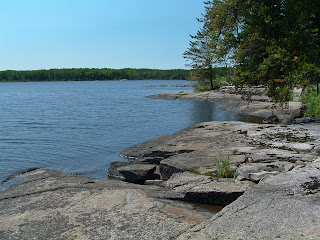 Naps were in order immediately on returning to the cabin. In fact, Tal says he thinks he fell asleep in the front of the boat as we made our way back to the lodge.
Posted by Janet Tarbox at 21:40