We did not get an early start this morning.  Neither of us could get comfortable during the night -- not enough cover, too much cover, AC blowing too hard when it was on, the room stuffy when the AC was off.  Generally fitful.  Both of us.  Although we went down to breakfast shortly before 7:00, it was after 11:30 before we left the hotel. 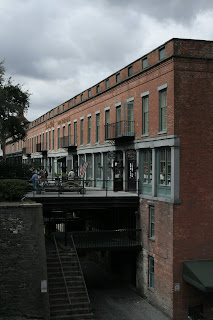 Our major activity for the day was an overview of historic Savannah from an trolly/bus.  Old Savannah Tours even came to the hotel and picked us up, a real plus for me since it meant I didn't have to move the car.  Our driver was clear and informative, told really bad jokes and introduced us to at least half of Savannah's some 24 public squares.  In my heart of hearts I'd like to explore each one, but settled for catching glimpses.  An on/off tour with 15 stops and with an all-day pass, had we wanted to we could have gotten off at any of those stops, explored a bit and caught another bus to continue the tour.  But, it was a sense of Savannah we were after, so we stayed aboard.

We did get off the bus at its next-to-last stop -- Factors Walk, an intermediary level on the bluff above the river, named for the brokers (called factors) in the Cotton Exchange, Savannah's long-time major commercial enterprise.  I was fascinated by the bluff, its architecture and how the various levels were used.  On the river side the buildings are six or so stories high, the lower levels used back in the day as warehouse space.  From Bay Street the buildings look two stories high are are reachable by foot bridges over Factors Walk, which serves the middle floors.

There are multiple sets of steps and ballast-paved ramps leading from one level to another along the bluff, some of them more spacious and less treacherous than others.  The one pictured here at the extreme east end of the plaza along the riverfront is among my favorites.  Another one that I especially liked is a double set accessible from River Street under the Masonic Temple, the left side being the image I posted today on my Flickr page.
Posted by Janet Tarbox at 21:46