With all the news and talk about the super moon scheduled to rise early this evening I had myself all organized to try out the various articles I have read about photographing the moon.

It's difficult to get a superior single shot because of the disparity between the moon's brightness and the night's darkness.  One either gets good detail in the moon and nothing else but black or a clear night shot with the moon completely blown out.  The solution to that problem is to make at least two exposures, one metered for the scene and the other metered for the moon and then merge the images into one.

My plan was thwarted by the weather.  In the late afternoon the day's clear skies began to give way to high clouds and by dusk it was overcast.  Shortly after 9:00 with a noisy storm building in the west, however, I noticed moonlight outside the east-facing front windows.  Indeed, there the super moon was in a break in the clouds, but situation was changing quickly.  Because of slight fog the moon was not clear, so I didn't set up for multiple shots.  Rather, I took advantage of the trees to provide atmosphere and some texture to the scene.  Within ten minutes my opportunity was over.  Whew. 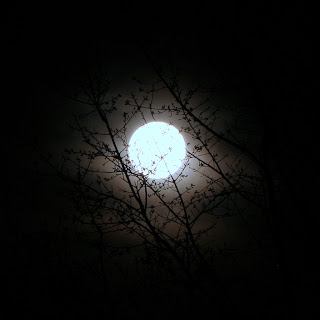 The storm is plowing through now -- loud, bright and wet.  I'm glad to have the image to prove to myself that I saw what I saw.
Posted by Janet Tarbox at 23:53