I drove to Columbia today for lunch with a friend.  He lives in a comfortable apartment overlooking the Congaree River between the Blossom and Gervais Street bridges on the river's west side.  I left home early in order to have a few minutes to spend in a small park on the Three Rivers Greenway at the west end of the Gervais Street Bridge.

It was the bridge I wanted to see, up close and with the camera in hand.  Again.  While I am drawn to bridges wherever I go, this particular one -- opened in 1927 and built at a cost of just over half a million dollars -- is a long-time favorite.
I found those details and many more on the SC Department of Archives and History's web site.  It was on another web site, Bridgehunters, that I picked up one fact about the bridge that both irked and amused me simultaneously.  It's in good repair, well maintained and in 2008 carried 27,500 vehicles every day.  But it's functionally obsolete.  That is, it does not function in the manner that it did originally.  So, for example, when it was new it boasted the widest roadway in the state.  Obviously, that's no longer true.

I suspect, however, that functionally obsolete means that, despite its graceful beauty and its continued usefulness, it doesn't move traffic as well as a newer, wider bridge would.  For now, though, it's still there.  I'm glad, first of all.  And, secondly, I'll stand and admire it as frequently as I can. 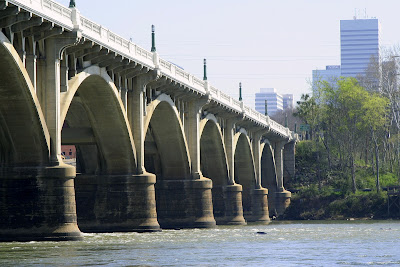