It's one of Tal's favorite sayings, one he teases me with when I've done something about which I am feeling particularly proud.  The end of that phrase is "finds an acorn now and then."  Our route through parts of the historic district helped us to do just that during the early afternoon.

﻿﻿We set out for a walk after breakfast to take in a site or two from the ground as opposed to yesterday's trolley view.  Several churches (the First Bryan Baptist Church and surrounds near our hotel, the Lutheran Church of the Ascension, the Independent Presbyterian Church and the Cathedral of St John the Baptist) gave us pause.   And, we spent time in three squares the names of which I can remember (Ellis -- more about that one in another post, Johnson and Chippewa).  Savannah is, indeed, a beautiful city.  Its ongoing revitalization does my historic preservation heart good.
﻿﻿
﻿﻿

﻿After an early lunch we decided to return to the hotel via the riverfront hoping to sit on a bench and watch a container ship moving up or down the Savannah.  No such luck.  As we headed toward the bridge, Tal noticed a man holding a camera with a very long lens looking down stream.  When we looked more closely ... a sailing ship, its sails furled, flying a New Hampshire flag, moving toward town, obviously powered by a small engine.  We walked back to meet it, the Lynx.
We learned from people in the crowd that it will be in Savannah for a month.  It'd been in all the papers -- which we'd not been reading -- and on the local news -- which we'd not been watching.  Lucky for us we'd wandered back to the bluff when we did.  Even a blind hog ... 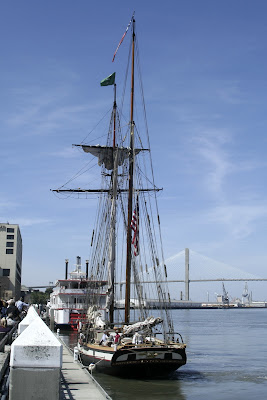