On the waterfront in Savannah

So far both evenings in Savannah we have made our way to River Street.
Sunday afternoon it was teeming with tourists, a pleasant sort of aimless throng.  It felt magic to me, the sounds and scents different from what I'm used to in my everyday life.  Cobblestones under foot, the tall balconied buildings rising up from the narrow street, street cars, sidewalk artists and musicians, couples with strollers and older couples holding hands (that included the two of us).  The river was almost as busy as the street, with pleasure boats vying for space along with huge container ships and colorful tugs.

Having missed lunch, we had an early dinner at the Olympia Cafe, a Greek restaurant which reminded me of the now gone Elite Cafe in Columbia I used to frequent in a former life.  We shared an entree -- sauted grouper with lamb gravy, lemon roasted new potatoes and rice with onions and green peas.  Luscious.  And, the light in the restaurant ... sweet, almost holy.  I felt obligated to make a few photographs.  Our waiter wanted to straighten the chairs!
Last night didn't include a meal as we'd had a big lunch.  (Plus, the hospitality room stocked by the spouses of the rifle team has some really good stuff!)  We left the hotel for the waterfront simply to sit by the river, to watch evening creep up, to see the lights come on across the bridge.  We were thoroughly entertained.
In one particularly dear scene a little child, a toddler, spotted a young man walking his dog.  The young man noticed the child's interest and stopped to speak.  A quick consultation with the parents resulted in the child being invited to "take" the leash and help walk the dog.  Over the moon, I think would be a fair description of the child's response.  Giving the leash back took a bit of negiotiation!
Here are a few shots of a container ship, the Dubai Express, we watched make its way toward the terminal.
﻿ 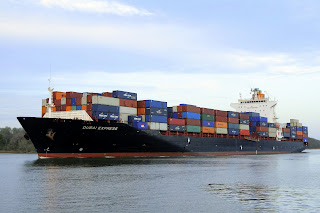 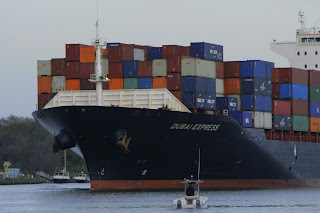 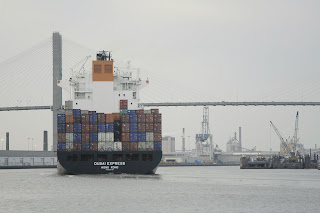 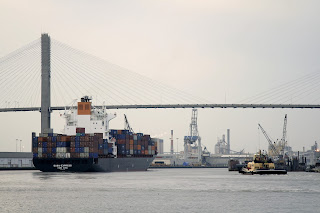 And, finally, THE bridge.  Driving over it takes such concentration.  One wants to look at the bridge, not the traffic on the bridge.  Yikes.  Imagine my disappointment that the bridge's construction did not allow for pedestrian access.

There are two sets of cables on each tower.  When viewed from a better angle than in the photograph above, the cables appear to be four sails.  I have yet to locate that "better angle" for a photograph of the entire bridge.  Safety is a real issue (more from traffic than from Savannah's residents, by the way).  The shot to the right was taken from the parking lot as we arrived back at the hotel for the night.
Posted by Janet Tarbox at 21:35