I have a thing about bridges, so was thrilled at the prospect of visiting Navajo Bridge again. Geri stopped on the south side where the vendors were set up. We stepped off for a geomoment with Marc, followed by a gander at the jewelry for sale and then a walk across the old bridge to the visitor center where Geri was waiting with the coach.

There were two major differences today from our October 3rd stop: 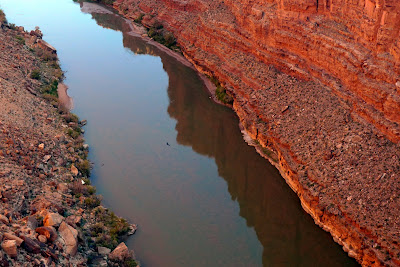 I don't have enough focal length power to zoom in very far, but there is a condor 450+ feet down just above the water in the center of this photograph (near the tallest part of the reflected cliff). 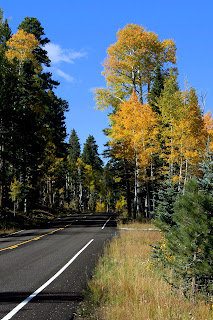 The drive from Navajo Bridge to the North Rim of the Grand Canyon was extraordinarily beautiful -- along and under the Vermillion Cliffs, into groves of red-barked Ponderosa pine around Jacob Creek and then at higher elevations the wonder of the aspen, their autumn gold peaking and contrasting strongly with the deep green of the firs and pines. The photograph to the right is one I made as we were leaving the park mid-afternoon.

We arrived at the lodge just in time for lunch. In fact, we were the first seated in the rustic and very elegant dining room (photo to the left), the canyon just outside the windows. It was hard to live into my "be where I am" intention -- enjoying the whole experience, not longing to be outside already! But, I managed. Warm company, good food, attentive service helped greatly.

Finally, off to Bright Angel Point (named by John Wesley Powell, by the way). Honestly, the experience of getting to the point reminded me of Geri driving the coach over the hogback on Boulder Mountain -- sheer drop on both sides of the very narrow trail. I'd not realized before how troubling heights are for me. I ended up only walking, looking at my feet which I was placing very carefully. If I wanted to look around, I had to stop and do only that! The dizzying discomfort was worth it, though. What a view up Bright Angel Canyon! 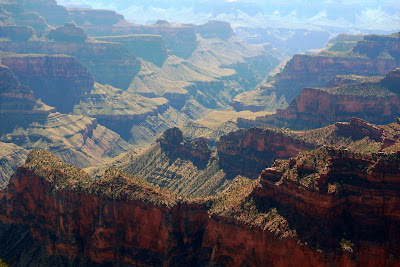 This photograph was made from Bright Angel Point. The Colorado River is just out of sight.

The water that passed through Glen Canyon before it was dammed, the water that found its way through Marble Canyon was a significant player in creating "the grandest canyon of them all" (a John Wesley Powell quote?). This location, so beautiful in the afternoon sun today, weathered and carved, has to be seen to be believed. Honestly, now that I have spent an hour or so looking out over it and down into it, I know full well I don't yet grasp the enormity of it all -- either of what I witnessed this autumn 2010 afternoon or of the long-term relentless forces the landscape's transformation required.
Posted by Janet Tarbox at 19:56