Albuquerque, straddling the Rio Grande, sits in a pass on the western side of the Sandis Mountains. As we passed through there yesterday and with the city shrinking in the rear view mirror, a landscape emerged in front of us that took my breath -- the northern edge of the Chihuahuan Desert and, way off to the south, trains. Long trains, purposeful and solitary. Trains moving in both directions -- east and west. (The intersection with the north/south rail route occurs south of Albuquerque at Belen.) Oh, wow.

Over the course of the 70 miles between Albuquerque and Grants, our stop for the night, those trains became much less distant. To my delight, I-40 crossed the tracks at some point and in Grants itself the rails ran between I-40 and the San Mateo Mountains which hover over the town. Also to my delight, our room was on the backside of the building which afforded us (namely me) a view both of the mesa during the late afternoon and early evening and of the trains -- which were far enough away that they couldn't be heard, actually, but their rumble could be felt distinctly.

I don't know when trains got to be such a big deal. It's been a long time, though. Most recently one of the perks of sitting with the gallery in Ridge Spring during the time I was a member of the art association was the frequency of the freight trains as they passed through town just across Highway 23. If there were no visitors when I heard horn in the distance, I'd step out on the porch of the old school building and wait ... and, yes, count the cars. It didn't dawn on me then, but it did last night -- when the train I counted (it was tough, but I limited myself to counting only that one) had six engines, three on either end, and 138 cars, that it's a pretty quirky, even obsessive -- thing to do. 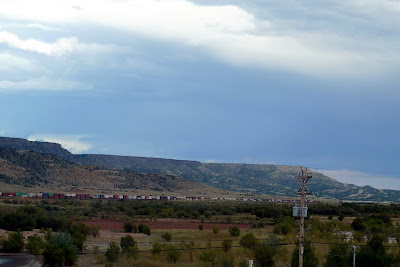 Although very difficult to see, there are two trains meeting in this photograph, taken through the window of our hotel room. Both sets of engines are to the right of the utility pole.

In fact, Adrian Monk's face flashed through my mind like a pang, when, mindlessly, I started counting a second train travelling in the opposite direction, as though knowing the number of cars were a necessity. "My stars, am I starting to degenerate into a parking meter/light pole touching, sidewalk crack avoiding, closet rearranging, towel stack straightening, obsessing nut?" I wondered.

*Don't know about Adrian Monk? Click here for a pretty impressive list of habits, obsessions and phobias.
Posted by Janet Tarbox at 17:22