When Tal and I travel by automobile, the point for most part is getting to our destination. We don't meander much, even skipping lunch or eating crackers, nuts, fruit as we move along, the passenger playing flight attendant to the driver. Given the distances with which we're faced in order to join our Road Scholar group in St George UT, we have to stay focused. Fortunately, with the ever-changing terrain, as I mentioned previously, focus isn't particularly hard. But, our destination ever in mind, passing by interesting spots can be.

We left I-40 and 75MPH, four-laned comfort this morning at Gallup NM to ascend the Colorado Plateau and travel through Native American lands along twisting, climbing, switch-backed two lane roads. The contrast one day to the next was dramatic to say the very least -- in both road and terrain. Mesas, buttes, washes, unfamiliar wildflowers, stunted trees in some places, magnificent Ponderosa pines in others. The beauty of Saturday, foreign as it was to east-coasters, was transformed into something other worldly. Tal and I kept trying to find words -- tortured, harsh, brutal, fascinating, mesmerizing, stark.

After reaching AZ Route 89A, passing along the Echo Cliffs on our right, with the San Francisco Peaks far distant on our left and the Vermillion Cliffs ahead of us, we entered Marble Canyon, through which the Colorado River passes on its way to the grandest canyon of all. 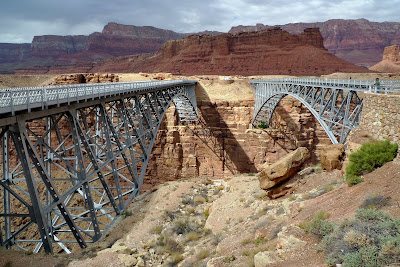 The bridge we crossed, constructed in 1995, is on the left. The original Navajo Bridge, built between 1927 and 1929, is now a pedestrian walkway, linking the vendors on one side of the river with the interpretive center and restrooms on the other. In the far background are the Vermillion Cliffs.

Our head-long momentum toward St George was stopped by about half an hour, a stop well worth the time. And, the only one over the course of our four westward days on the road.
Posted by Janet Tarbox at 23:12