I know this is going to sound irreverent, but it is the truth. Since Tal and I began planning to come on this trip I have not been able to think about Arches National Park without having Jean Stapleton's Edith Bunker invade my head, that signature, fingernails-on-chalkboard, "oh, aaa'-chie." I got over it today, though, as we immersed ourselves in arches (with the requisite "R" inserted in the word) and I was infused with a huge dose of awe. 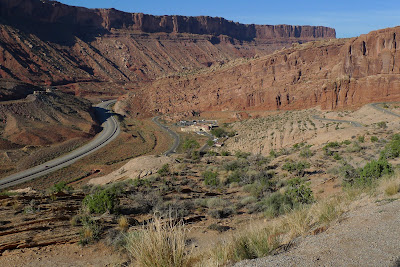 This is the view back toward the Visitor Center after the long climb (by coach) into the park when we stopped to see the view and for a geomoment. US191 and the Denver and Rio Grand Western railroad tracks come through the Moab Canyon -- a major fault. 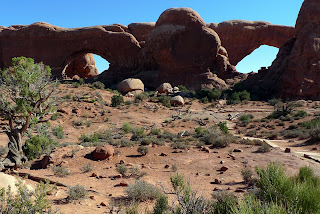 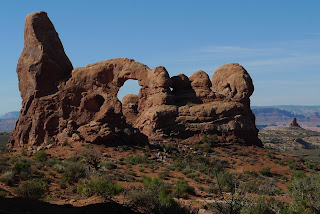 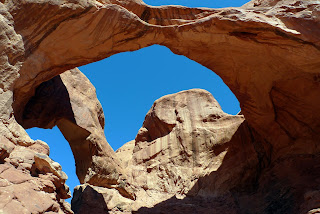 Double Arch is a pot-hole arch, formed by water erosion from above rather than the more usual erosion from the side.

The park, today being Sunday in a holiday weekend, was very busy. Geri had gotten permission for us to eat our lunch and have a geomoment in the solitude of the Amphitheater near the campground. Skyline Arch formed a stately backdrop for all that nourishment, the back seats in the amphitheater meeting the dead tree in the foreground of the photograph. 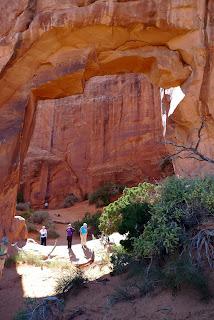 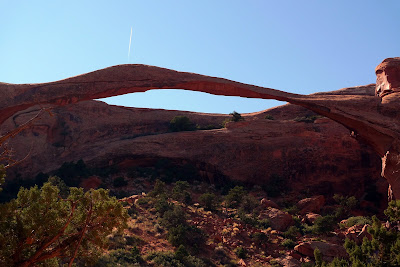 Landscape Arch and contrail. Newsworthy as the longest arch in the world, Landscape shed a few pounds in the 1991 -- an over 7o-foot piece from its underside, making it even more graceful and a little closer to the end of its existence. The link in this caption is to a great photograph, my efforts hampered today by the angle of the sun. 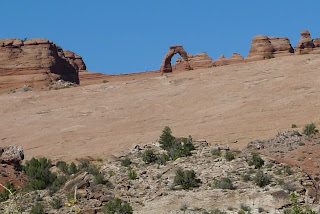 We viewed Delicate Arch from the lower viewpoint -- very far away. Our day by this time had grown long and hot, the hike up to the arch over three miles with an elevation gain of 400 feet and exposure to unprotected heights. This arch is the last one standing in what was once a long line. 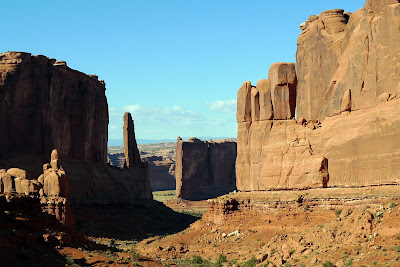 This spot is called Park Avenue, reminding the person who named it of the building-lined street in New York City, I suppose.

At the end of the day, even though I was weary, it was hard to leave this park. I don't think it's my favorite -- I still have fresh in my mind the drama of Dead Horse Point, but there is something haunting here. I'm reading Edward Abbey's book of essays, "Desert Solitaire," written during and about the first summer he spent at Arches as a ranger, predating its development for "industrial tourism." Here's a bit of what he says about Delicate Arch, a few words that I think hold true for the experience of wilderness in general and more generally and universally for life itself:

For a few moments we discover that nothing can be taken for granted, for if this ring of stone is marvelous that all which shaped it is marvelous, and our journey here on earth, able to see and touch and hear in the midst of tangible and mysterious things-in-themselves, is the most strange and daring of all adventures (37).

Enough for today. Tal and I had more of our fabulous and generous lunch for supper here in the hotel, since we shared one at mid-day in the presence of Skyline Arch. Our after supper stroll along the main street of Moab as dusk draped itself across the desert was a quiet end to a good, tiring, satisfying day.
Posted by Janet Tarbox at 22:33