It's only a building

Spent a few damp minutes mid-morning today as I struggled to take in the news of the chapel at Virginia Theological Seminary in Alexandria -- lost yesterday afternoon in a catastrophic fire. No one was in the building at the time, blessedly, and none of the other buildings on campus were affected, thanks to the determined efforts of Alexandria firefighters.

The photographs here are all borrowed, the one of the chapel's interior (immediately below) from a photograher identified only as Ronnie R on flickr and those of the building as it burned from the online album of an individual who witnessed the scene, known on Facebook as bcramey. 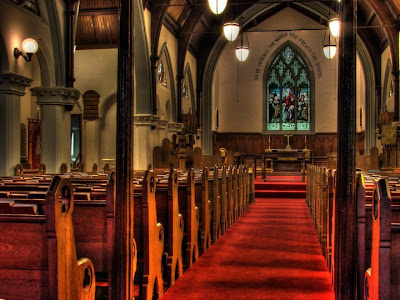 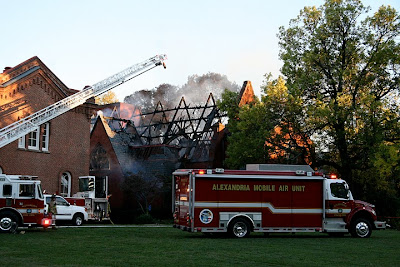 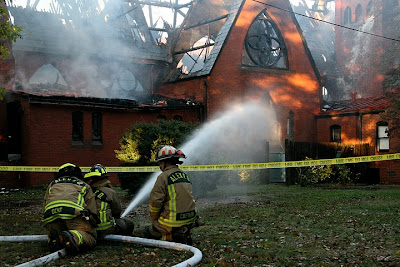 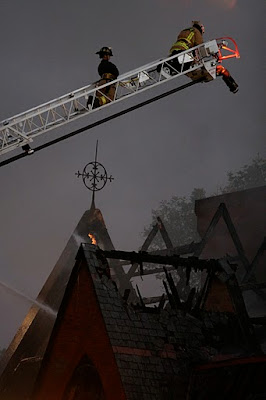 The most stark view, however, and what brought the building's loss into deep reality for me is from the iPhone of Dr Stephen L Cook, professor of Hebrew Bible/Old Testament. His steady, silent movement from the vicinity of the library toward the chapel, the only commentary footsteps through the dry fall leaves and the wail of approaching emergency vehicles, chilled my blood and brought on the relief of tears.

While it is only a building, it was a place of refuge, of comfort, of challenge, of inspiration, indeed, a memory-maker for many thousands. Everyone of us will grieve the trauma of its destruction.
Posted by Janet Tarbox at 20:23