After reporting endlessly on the weather through the early days of this trip, I am happy to write that today's dawn brought with it blue sky and sun. Several of us were out before breakfast to record the occasion, this being the view from the back of the hotel. 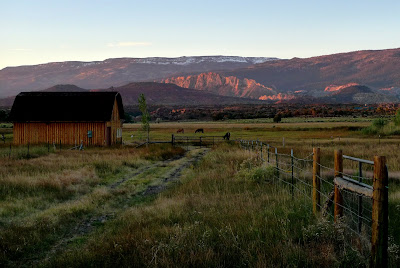 We spent the entire day at Capitol Reef National Park, a few of the predominant features being the Fremont River, which flows unimpeded through the park, a green swath through a rocky landscape; giant domes of Navajo sandstone, one of them reminiscent of the dome on the US Capitol building; nearly impassable rocky cliffs -- somewhat like reefs -- along a giant crease in the earth's crust, called Waterpocket Fold, caused by a collision of the North American and Pacific plates some 70 million years ago; petroglyphs of the Fremont people. For all the legendary beauty of Zion and Bryce, I have to say there is something about Capitol Reef that I especially like. Admittedly, the welcome sunshine might play a part ... 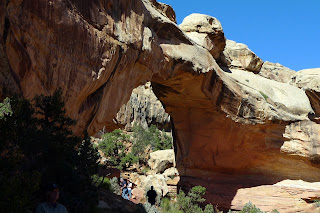 An honest-to-goodness hike was the major activity of the morning, a rather strenuous two-mile round trip to Hickman Bridge, a remote and stunning location (and difficult to photograph). Many of our group made it. Others decided after the first long pull to turn back. Still others stayed with the coach, taking shorter walks, even helping Geri wash the bus! And, we have been left with an assignment: Despite its name, is the Hickman Bridge a bridge or is it an arch?

Our lunch time was spent in the Fruita section of the park in a luscious, although stealthily muddy, picnic area right by the Fremont and next to an apple orchard, sadly done for the season. We were sort of hoping for apples to augment the contents of our bags. 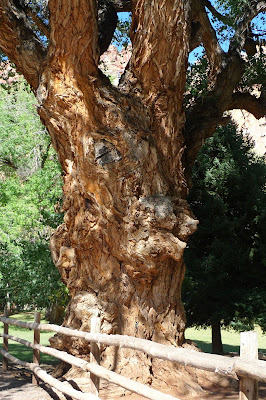 This cottonwood was one of two giants shading the picnic area; I wish I could see these trees again in a couple of weeks, their leaves a signature golden yellow.

Before returning to Torrey, the hotel, dinner and an evening lecture, we walked along the pathway under the petroglyphs. They are high on the cliffs and difficult to see, but spotting one is a pleasure. 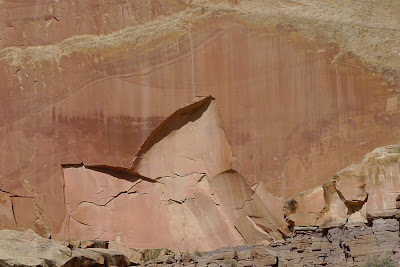 Sadly, this is my best effort. More sad, is the ongoing erosion that caused the "M" to fall away from the face of the cliff, sending much of the art onto the pile of rubble below. Look closely. There's a line of human-looking figures to the right of the "M" and something that resembles a horse or large animal to the left of it.