Well, on Saturday (as I think I wrote) I found myself a little embarrassed at having never heard of John Wesley Powell. And, this afternoon it's happened again.

We arrived back at the hotel following our five-hour Rainbow Bridge boat tour on Lake Powell and the stop at the Glen Canyon Dam with a couple of hours free time before the coach departed for supper. Free time is most unusual on this trip; Tal and I wanted to take advantage of having a choice! We headed up Lake Powell Boulevard to take in the John Wesley Powell Memorial Museum two blocks from the hotel. Unlike the museum at Green River this one is small, even cramped, doubling as a visitor information center. Like the museum in Green River it's full of interesting detail -- some of the detail different from that Saturday stop, too.

While there we came upon an exhibit about a young man, Everett Ruess, an artist/explorer who wandered the uninhabited wilderness southeast of Escalante UT in the early 1930s. His poetic letters home nearly sang, so captivated was he by the beauty of the land. He disappeared without a trace in 1934, probably dying before his 21st birthday.

The exhibit left me wanting to know more. Like the museum in Green River, this museum had an attractive and comprehensive bookstore. Believe it or not, I refrained from purchasing a book on Ruess, as I have two books (which we're carrying around) on hold already while I finish "Desert Solitaire." His is a story, though, I will explore -- and soon.

We had dinner at a busy-to-chaotic oriental restaurant and then were treated to a star-gazing opportunity. Geri took us on a short drive away from town to a point where we could stand in an open field and see the stars in a way most of us never have. Without competition from other sources of light the heavens were alive with twinkling stars and the steady radiance of planets. The Milky Way is, indeed, a swath of white across the sky.

The combination of these past few days in the bigness of the west and now having stood outside under the bigness of the nighttime sky leaves me here at bedtime with the one best word I can scrape out of my vocabulary: unfathomable. One thing I know for sure in this moment ... nothing that bothers me, none of the problems I think I have matter in the face of all this boundless space, the space on which I have been walking since coming west and the space into which I gazed tonight. 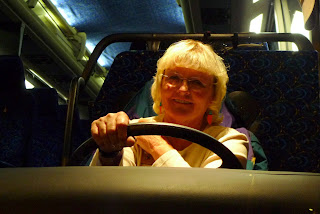 I've written about Geri for days now. Here's a face to go with the name, this photograph taken as I approached the coach while we boarded before dinner this evening.
Posted by Janet Tarbox at 22:39