An answer for VTS 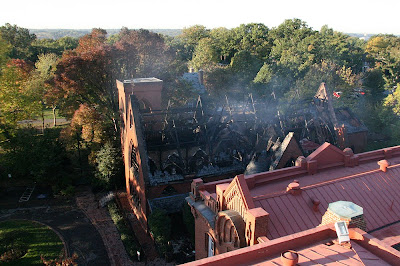 Photo by B. Cayce Ramey, VTS Class of 2012
Over this week following the devastating fire which destroyed Immanuel Chapel at Virginia Theological Seminary, the school's the Dean and President, the Very Rev'd Ian Markham, has led a worldwide community through their surprise and sadness over the lose of that long-prayed-in space. Today he announced that officials of the Bureau of Alcohol, Tobacco, Firearms and Explosives (ATF) along with members of the Alexandria Fire Department during their six-day investigation determined the fire which began in the sacristy to have been accidental.

I appreciate his clear, concise, compassionate words taken in part from his daily commentary posted on the seminary's website.

We have learned the cause of the fire. It was an accident; no one is to blame. So we take a breath and offer the entire tragedy to God. There are some moments which are transforming. This is one of those moments.

Now we start the hard work of moving on. Last night we gathered in Scott Lounge for worship. Scripture was read with passion; we sang praises to the Lord God; and we bowed our heads in prayer. God was present in that place.

Everyone who has been associated with VTS since that building was built in 1881 has memories. And, most certainly, those who watched it burn last week will have what they saw imprinted on their memories forever.

But, he's exactly right. We now know what we need to know.
Amen.
Posted by Janet Tarbox at 20:16