A day in St George

Our geological adventure is underway, although we haven't travelled any distance so far. 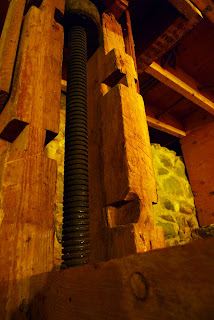 After breakfast in the College Inn lobby our morning began with an engaging lecture by Dr Douglas D Adler, former president and professor emeritus at Dixie State College, whose presentation ranged from the design of the Morman community's irrigation system (which still works) to the various forces affecting current settlement in the area. He followed his talk with a field trip to the St George Tabernacle (a masterpiece of architecture), a pioneer cabin (smaller than our kitchen at home), the St George Social Hall/Opera House (where in the basement we saw the mechanism by which the main floor could be lowered on the stage end to make the transition from social hall to theater -- seen here to the above left) and the Old Washington County Courthouse. And, Geri showed off her driving stuff with a very neat U-turn in the middle of town! The morning ended back at the College Inn with Marc's first geology lecture -- where he promised that we would, by the end of the trip, "get it," since he planned to repeat everything 71 times.

The afternoon began immediately with lunch back on the Dixie State campus, this time in the Red Rock Cafe with the students, great and abundant food in a bright, cheerful, positive space. In fact, it was so uplifting a space that I found myself, while chewing, having sort of drifting thoughts of being back in school. Didn't last ... This photograph was made from the back of the Gardner Student Center looking toward St George proper. Don't focus only on the couple in the foreground. Check out those clouds, and allow yourself to imagine ominous music beginning to waft through the air.

Then, we set out to take a look at some of the geological formations Marc had talked about before lunch. First stop: a church parking lot north of St George for views of cinder cones and the Pine Valley Mountains (below), an example of a laccolith (an uplift caused by the intrusion of molten igneous rock between layers of sedimentary rock), one of the largest in the world. 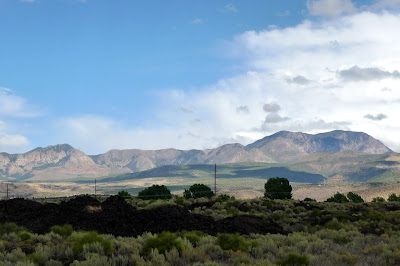 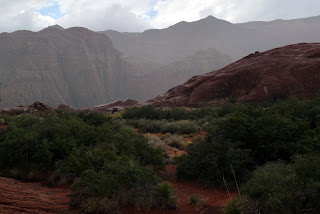 Our second stop: Snow Canyon State Park. By the time we were off the bus in this georgeous canyon the ominous weather fell upon us, lightening strikes rapid and close, the rain heavy. Although sad not to be able to scramble over the rocks all afternoon, we were pleased with Chrystal and Marc's plan B.

First, a visit to the next canyon to the west, Padre Canyon, site of Tuacahan Center for the Arts. 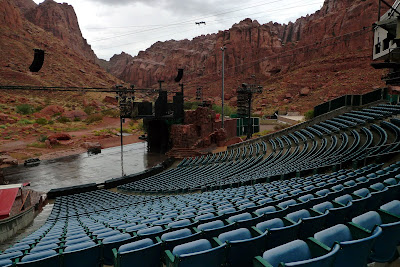 What a location for a 2000-seat amphitheater, not to mention a highschool for the performing arts.

And, second, a leisurely drive through Kayenta, a desert community west of St George, featuring sustainable homes and Coyote Gulch Art Village -- all set in the signature red rocks of the region.

Supper at Chuck-a-Rama (better than the name intimates, I promise) ended this very long day. I am remembering a statement in the post-registration packet we received -- "Please note: There is very little free time during this program." If today is any measure, they were telling the truth. I am already a bit saggy and am hoping that sleep comes without a fight and lasts all night.
Posted by Janet Tarbox at 21:07