After our enthralling time at Bryce Canyon this morning and a lunch back at Ruby's, we set out along Utah's Scenic Byway 12 for our night's lodging in Torrey. I scarcely know where to begin. There were two stops, one at the visitor center for the Grand Staircase-Escalante National Monument and another at the Anasazi State Park museum. Add to that austere, long-view scenery, weather determined to get our attention, a thrilling stretch of road called The Hogback on Boulder Mountain (think tight-wire and a 25-ton bus), a one-man cattle drive and we had ourselves a full and interesting afternoon.

This trip so far seems to be alot about the weather. St George normally gets on average 8.5 inches of rain each year. While we were in town, at least half that fell. Most visitors don't get to see waterfalls in Zion or fog at Bryce. So, as we set out for Torrey and Tal and I noticed that the sky was dark behind us, we were determined to make the best of it. "No problem," we murmurred to ourselves. "We've passed all that."

And, indeed, the threatening clouds did stay behind us -- through our stop at Grand Staircase, through the slickrock canyons beyond and well into our time at Anasazi State Park -- for several hours. 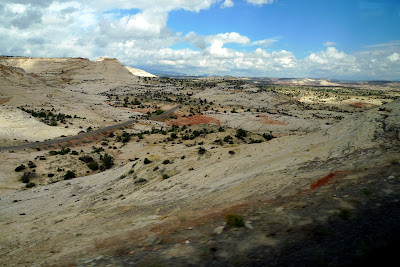 This is a view, taken from the bus, of the terrain east of the visitor center at the Grand Staircase-Escalante National Monument. Bleak, but compelling, as well. 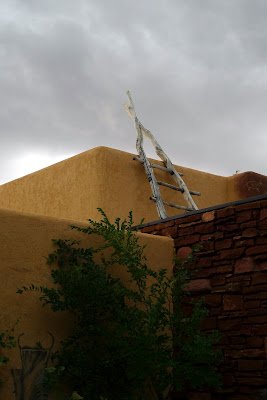 An arty shot of the roofline over the entrance to the museum at Anasazi State Park. The Anasazi people are thought to have lived on the site from 1050 to 1200CE.

As our time in the museum and on the grounds grew short we began hearing thunder and realized that those dark clouds had flanked us, doing an end run around the mountain. The storm was fast and strong -- lightening and thunder, spitting rain and hail. That didn't keep me from enjoying the scenery, though. The aspens on Boulder Mountain were beginning their glorious autumn transformation (see below). I am pleased that the rain hadn't streaked the windows until I made that shot. The Henry Mountains are in the distance -- another example of laccolith. 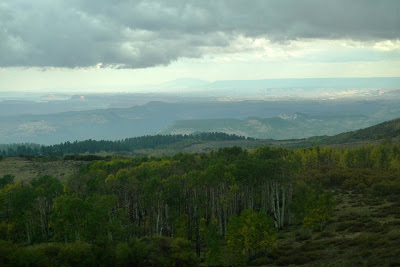 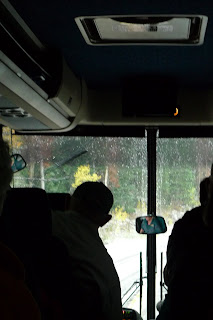 While we were not a particularly boisterous group, a reverent hush fell over the coach as the drive continued. In the photograph to the right, taken the length of the coach's aisle, that's snow on the road, and a slushy ice was sticking to the windshield, building up on the wipers.*

Then, Geri braked rather forcefully. A car stopped in the road ... waiting for a big, black cow to move. Once we were underway again, we were amazed to see cows all along the side of the road. Then, there appeared a man, wearing a bright yellow slicker, on horseback driving a herd of cows toward us just off the pavement. As we passed by him it felt as though I could reach out and and touch that slicker, the man's head just above the bottom of the windows. Free range, I suppose.

Not long after we were off the mountain and gladly driving the main (and only?) street of Torrey, the excitement over for the day, our hotel a welcome sight.

We had a wonderful dinner in the restaurant at the nearby Sandstone Inn (not where we were staying), made even more wonderful by what I beheld as I stepped off the coach. Needless to say, I was not the first one to be seated inside. I hope this means the worst of the challenging weather is behind us. 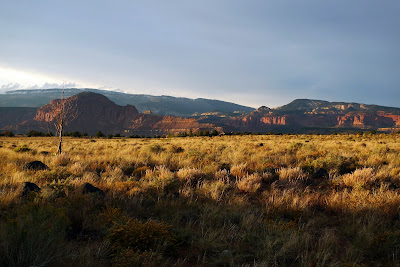 *The coach does carry chains and Geri said later that had she not known we were almost off the mountain when the snow started, that is, had we been farther back, she would have stopped and put them on the tires. Now, that would have too much for one day.
Posted by Janet Tarbox at 23:37