We set out this morning for Zion, a short distance from St George; I could hardly contain myself. Seeing the iconic national parks of the southwest and learning something about their individual characteristics is one of the primary why's of the trip. And, we're off ... 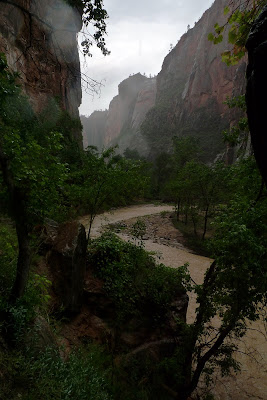 We had a good hike during the morning, though not the one Marc had wanted us to make originally. But, the weather dictated something less muddy and rugged. So, deep into the straight canyon we went -- to the Temple of Sinawava and the (paved) riverside walk, learning about hanging gardens, blind arches, Navajo sandstone, desert varnish -- the North Fork Virgin River running high, fast and muddy along our route. We consoled ourselves that seeing Zion in the rain is somewhat unusual.

I used both cameras in hopes of capturing a shot or two that would evoke in the viewer the wonder I felt and the beauty I perceived as a first-time visitor. Eventually, I realized that I would probably put the Canon away for this trip. There's nothing more irritating than having some person with a camera holding up the group or always lagging behind. Well, except being that person, perhaps.

By lunchtime we had been out in the wet (hurray for good rain gear) for a long time and we were cold. Staff in the Zion Lodge had opened a gathering room and built a fire, and there, snug and comfortable, we ate our sack lunches.

The drive after lunch to the east gate of Zion along the Zion-Mount Carmel Highway was spectacular! Long grades, switch-backs, layers of rock with names I may come to recognize in time, road construction and the tunnel itself -- built in the late 1920s, over a mile long with five galleries (windows) onto the crevasse below. Then, we were confronted with the dramatic, precise, cross-bedded world of Checkerboard Mesa and travelled along the Sevier Fault. Before arriving at Bryce Canyon City and Ruby's Inn, our home base for the next two nights, it seemed as though we were riding in the clouds -- sleet on the windshield and visibility less than optimal. I'm SO glad Geri's driving. 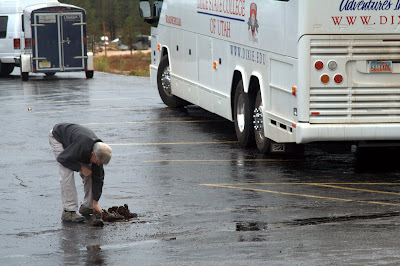 Here is an unidentified guest at Ruby's doing what all of us had to find a way to do -- rinse the mud out of the lugs of our hiking boots. There weren't enough potholes in the parking lot. That's our coach is on the right.
Posted by Janet Tarbox at 21:53