Yesterday afternoon was a terribly difficult time. I was in no way prepared for such a formidable start, five miles of paddling into a relentless, howling headwind. By the time we approached Scofield Point, despite several all-group rest stops, Tal and I were so tired that we didn't quite make it to the campsite. When we tried to round the point, our canoe was caught broadside by the wind and we simply couldn't keep paddling straight long enough to complete the turn.

Colin was in the single canoe in sweep position; he recommended that we paddle to the bank on the back side of the point, which we did. Exhausted, we carried our personal gear up the shore to the campsite. We weren't quite alone in our failure, but we didn't make it by a considerably larger margin than a few of the others. Colin assisted folks with gear while Alana and Eric ferried canoes. What a beginning.

But, Scofield Point was certainly worth the pain, I must say. As we set up our tent and camp life was established, the wind died down and we took a short walk along the bank soaking up the stillness and the quiet. 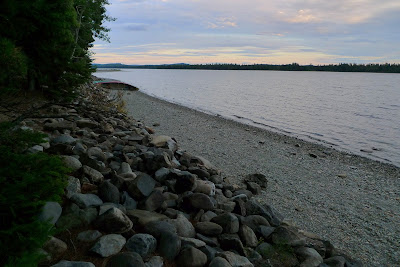 We arrived and ate late enough that we needed headlamps again before the cleanup was finished, but what a meal -- a delicious concoction of black beans and salsa, sauteed onion and ground meat for burritos and a dessert of ginger-brownie cake baked over the campfire. Divine! Have I mentioned that Alana is a personal chef?

It rained in the night, a nice sound on the tent fly. And, as Tal and I were waking in the pre-dawn, we heard very distinct footsteps outside and moving past our tent. Moments later came a terrible snap followed by a loud crash. A moose had come through the campsite, getting tangled in one of the lines securing the tarp over the table and fireplace. Very exciting! We should have seen moose eating in the marshy area at the back of the point after dawn, but with the unusual wind direction continuing overnight, they with their acute sense of smell stayed away.

With the overnight rain came a change in wind direction to what Alana and Colin had expected for yesterday. So, today we paddled back to Churchill Dam with -- a headwind. Somehow, we were more ready for it today than yesterday and, though hard, we kept up pretty well.
Posted by Janet Tarbox at 16:25