I awoke before dawn deep in my warm sleeping bag expecting to hear early morning bird sounds. Nothing. Silence. Except for Tal's regular breathing next to me. But, then ... the unmistakable scream of an eagle. "Yes, we are in the woods!" I thought. Unfortunately, I was so out of kilter in that moment that I couldn't figure out how to get out of the tent, much less find my clothes, in order to try to catch a glimpse of the creature offering that first wilderness-morning greeting. I suspect it's going to take me a day or two before I get a routine going -- erecting and disassembling the tent, keeping the dry bag sort of organized, putting my shoes in the same place each night. 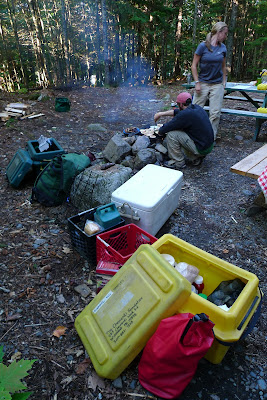 Luckily for us, Alana and Colin are used to all this. Coffee was perking and breakfast well underway by the time we emerged to greet the day. Our first breakfast? Scrambled eggs, English muffins and sausage. I could get used to this ...

A slow morning, though, it was not -- since we had to drive several hours again before we arrived at Churchill Dam where we would take the canoes off the trailor, learn the "Chewonki way" of loading them and paddle off to our first campsite in the Allagash Wilderness Waterway.

We made four major stops during the morning, the first two almost immediately. The Big Eddy Campground is on both sides of the West Branch of the Penobscot River. (Of course the name refers to a fishing pool below a long stretch of whitewater. But, that doesn't keep people from using an affectionate though inaccurate name: the "Large Edward"!) Since we were on the side opposite the office and we needed both fire wood and water, we headed there, but stopped before crossing the bridge.

First Stop -- Cribworks Rapids: DO check out the highlighted link for a terrific photograph and a short paragraph on the rapids. What a terrifying sight this was for the white water novices among us who would be confronted with the Chase Rapids on Wednesday! I absolutely did understand that the Cribworks were blasted into their wild and sharp present form by loggers using dynamite, that they are Class IV+/V and that the Chase Rapids top out at about Class III, but my head knowledge didn't help much at that moment. Still a stunning scene, I must say. 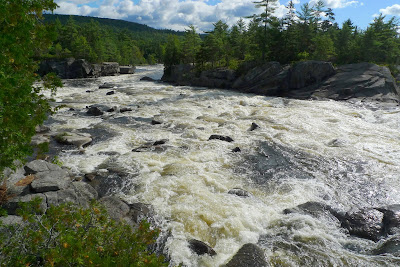 Second Stop -- Big Eddy Campground: The Big Eddy opens up at the bottom of the Cribworks and Big Eddy Rapids. We enjoyed watching fishermen and kayakers, absorbing the early mornning ambience of the place, filling water bottles, taking advantage of one last restroom and sipping a final cup of coffee before settling in for the ride. 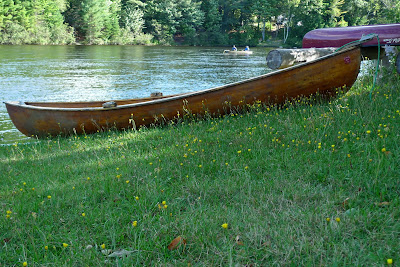 Third Stop -- Telos Checkpoint: Since much of the land and roads is privately owned by timbering corporations, recreational users are required to register their presence as they enter the North Maine Woods and to pay user fees. This stop required about 30-minutes, allowing for the stretching of legs and sinking in of the increasing remoteness of our situation, as seen in this view of the road leaving the checkpoint. 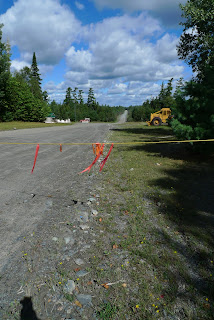 It was to our advantage that we were making this drive on Labor Day. The loggers were taking a rest from their considerable labors, so we didn't have to negiotiate for road space with the trucks.

Forth and Final Stop -- Churchill Dam: Originally, plans for this trip called for a different starting point and a longer paddle. Concerned about southerly winds on the large lakes which made padding difficult, Alana and Colin had proposed putting in at Churchill Dam and paddling up Churchill Lake with a tailwind for an easy first day's paddling. As we unloaded the van and trailor, enjoyed lunch, learned about balanced loading and securing everything in the canoes, the wind did pick up, but in the wrong, opposite-from-normal direction! When we set out for our campsite at Scofield Point, a very desirable location, in was into an increasing wind which tested us from the very beginning. More about that later. 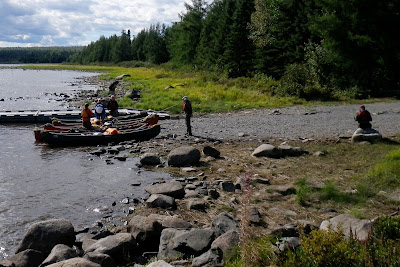 This photograph was taken by Colin McGovern from the dam (looking south and upstream), documenting all five canoes fully loaded and the seven Road Scholars ready to get their paddles in the water.