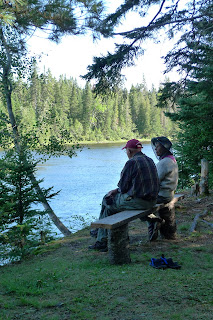 We are in camp after a not-to-long paddle from Round Pond to Five Finger Brook. The campsite is another beautiful spot, sitting on a bluff overlooking a pretty and fast stretch of water where a number of streams run into the Allagash.

Here Tal and Alice enjoy the bench overlooking the river and some conversation prior to the beginning of supper preparations.

It has been a storybook day. The rains ended after the camp went to bed last night. That campsite on Round Pond was a quiet as all the rest, save the occasional sound of an occasional high-flying jet. And, since I was sleepless initially, I heard an eerie and beguiling chorus of loons. At one point, an owl, way in the distance, joined in. What a privilege to be here.

Tal and I got up at 2:00 to walk to the outhouse and saw the heavens aglitter with stars from horizon to horizon and reflected on the surface of the water. Utterly magnificent. I suppose that sight puts a person as close to pure worship as is possible -- that sudden intake of breath, the whispered, "oh, look!"

By 6:00, when the camp began waking, the place was completely socked in with fog. Only the edge of the water proved that Round Pond was out there. We had breakfast, broke camp and were on our way shortly after 9:00 into a clear, sunny day -- our first since setting off on this journey along the Allagash. 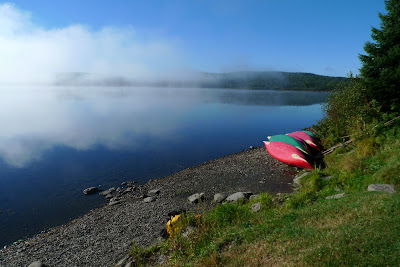 I took this photograph while everyone was breaking camp and the last of the fog rolled away.

Our route took us through the Round Pond Rips and the Musquacook Deadwater. Much of it was tranquil, even serene -- and, again, all river with one emerging view after another around every turn. In addition to memorable vistas, we saw two moose -- a cow and a bull; several eagles, two of which kept their tree-top positions as we paddled by, another escorting us for quite a distance along the river's route; many geese and mergansers. The bull moose gave a memorable performance. His rack was so wide that when he decided he didn't like the looks of five approaching canoes he had to trot a rather long distance in the shallow water at river's edge until he found an opening in the thick growth to get the antlers through. We all watched his every move until he melted into the woods.

The wind -- a headwind -- picked up well into the paddle, turning our transport into work. I am very sore, but am holding my own. The wind caught us once in a tight maneuver and we ended up hung on a rock, a position from which Alana had to free us by physically pulling us backward, lining us up with the water's flow and turning us loose. We ended up riding that rapid very well. The sunshine did help.

I've been in the water since arriving in camp. Cold and moving water. I resisted, trying to talk myself out of the frigid plunge and a freshly wet swim suit, but in the end concluded today likely to be my only chance in this lifetime to swim in the shadow of Musquacook Mountain. I had to decide quickly. Before the glorious sun fell below the ridge. Burrrr and whoo ha!
Posted by Janet Tarbox at 15:45