I am writing after our run down the Chase Rapids and we're all in one piece! I cannot say that anxiety was not part of the experience. The rapids are four miles long with a drop of about nine feet per mile. I'd be telling a mighty lie were I to discount how worried I was. It could have been Niagara Falls as far as I was concerned! Truth is, since all our big gear -- our dry packs; tents; the wannagans, the cooler and the pickle barrels containing our food -- was transported around the rapids by the ranger so we could run with empty canoes, I comforted myself by acknowledging that were I absolutely unable to force myself to participate I could ride around with him and the gear. Miraculously, that thought did help.

I rained some in the night and we awoke to a steady rain. Alana amazed me with breakfast. Had I been in her position, facing rain and a challenging section of water with several novice paddlers, likely I would have served cold cereal and bagels, something quick and simple. A reflection of my anxiety, I judge. She and Colin, on the other hand, produced bacon and blueberry pancakes with Vermont maple syrup over a fire!

On days when there are paddlers waiting to run the rapids water is released through the dam from 8:00AM to noon. After the gear had been loaded into the truck and while we waited to see if the rain would abate and for the water in the Allagash to rise, we walked across the dam to visit the museum. Late blooming lupine in pink and blue on the east side of the dam was a surprise to us all, and a particular pleasure to me as it was Hester's favorite flower and something she loved most especially about Maine.

The rain kept falling, though, and the water wasn't going to get any higher. We had to set out. 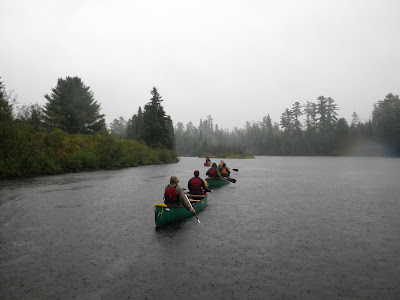 This photograph is one taken by Colin in sweep position just as we left the dam. The first rapid is around the curve in the river to the left. I am grateful to Colin for having documented the group's passage, as all of us kept our cameras stowed in our waterproof day bags and pretty much had all we could handle in the rushing water presenting itself to us.

Within a couple of hours we'd done it with only one mishap. A canoe went over on the second rapid and as serious as it could have been the paddlers did what they'd been instructed to do during yesterday's practice and Alana and Colin's extensive training at Chewonki became evident immediately. Tal and I were the fourth canoe in the line, so we eddied out and waited until everyone was back in the proper boat and the water was clear. We had our turn without having anyone to follow to show the way and we did fine. It wasn't all easy after that, but I settled down, realizing that all we had to do, all we could do, was follow when we were able to see a canoe in front of us, try to read the water no matter what and take the river as it came. 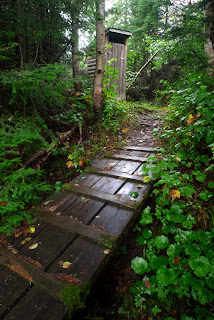 We stopped at the site of the former Bissonnette Bridge where our gear had been deposited to reload the canoes and for a relaxing lunch break. Alana's tuna salad was exceptionally magnificent! Even the outhouse was deserving of its own photo. I suspect it was pure relief that enlivened my reactions to the ordinary to such a heightened degree. 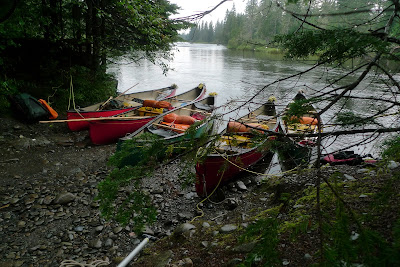 In this downstream view our reloaded canoes await the next leg of our journey.
Posted by Janet Tarbox at 21:23