Today we paddled from our Chisholm Brook campsite through Umsaskis Lake, Long Lake and Harvey Pond. It was a very hard day for Tal and me. We seem to be better at rips and rapids than we are long stretches of lake and headwinds in intermittent rain. Consistently, we were at the end of the line. On a positive note, however, we didn't lose ground as we did on our first day out and, when all was said and done, we made the distance. A T-shirt that Chickie and Pat Harristhal sold in their shop at Canadian Border Outfitters outside Ely MN, which had "Shut Up and Paddle" on the front, was my mantra for the day.

Of course, it wasn't all gloom. We saw our first moose up close on the approach to the American Realty Road bridge crossing the thoroughfare between Umsaskis and Long Lakes. She was watchful as our flotilla approached, but continued eating until about the third canoe passed under the bridge, only then slowing moving back into the tall bushes. We were pretty far behind and my camera's focal length power is limited, so I didn't get a very good, close, well-composed shot.

We have camped at the ruins of the Long Lake Dam, a very picturesque spot. The ruins of the dam might seem runnable both from the water and from the campsite bluff, but the literature I've seen suggests strongly trying it to be a bad idea, there being submerged spikes which could seriously damage a canoe. A short portage is required, so the canoes were brought out of the water and to the campsite for the night.

This afternoon has provided Tal the second opportunity he has had to use his flyrod, the first having been at Churchill Dam Tuesday afternoon. While none of the fishermen in the group (Colin, Eric, Tal) have caught anything they could keep, watching them in action is a pleasure. 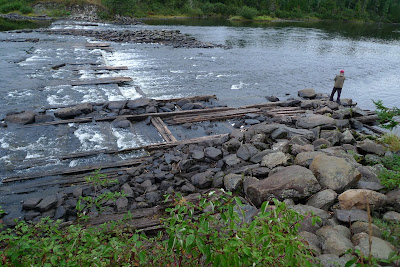