Tal and I have looked forward to canoeing the Allagash for several months now -- for the legendary white pines, for the challenage of serious physical activity, for getting to know a new group of people -- well, for lots of reasons. And, I like to travel, pretty much for travelling's sake, truth be known. With Hester's death I added another hope after we wiped our tears and waved goodbye to Bill: that the primitive nature of the Allagash Wilderness Waterway and the Maine North Woods will provide space for quiet and memory and for grief and gratitude. 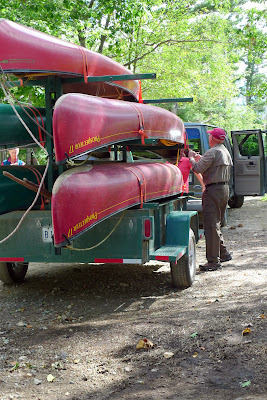 We left Saturday Cove after breakfast this morning for the one and a half hour drive to Wiscasset and to find Chewonki, sponsor and coordinator of our trip. We did the "duffle shuffle" (getting our things out of our own luggage and into dry packs), met and had lunch with our two guides -- Alana and Colin, both from Maine, and three of the five others in our Road Scholar group -- Alice from Williamsburg VA and Kathleen and Dave from near Ashland VA, loaded up and at 2:00 set out in a 12-passenger van with canoes following along behind. (Pictured here is Tal double-checking the canoe straps.)

At a Dysarts truck stop in Bangor we rendezvoused with our final two group members, a father and son -- Ron and Eric, Ron from Maine and Eric from Idaho. Although at a little after 4:00 we were officially together and on our way, it wasn't until we left I-95 at Medway/East Millinocket and headed into Maine's interior that the remoteness of what we were about to do began to sink in for me.

It was dusk before we pulled into Chewonki's Big Eddy Campground on the Golden Road (which runs from Millinocket to the Canadian border and is the most active logging road in New England) and the West Branch of the Penobscot River, just outside Baxter State Park. It was there that we learned to pitch out tents and had our first meal cooked over a fire -- both activities accomplished in the dark. Now I understand why headlamps, rather than flashlights, were so highly recommended on our equipment lists ...
Posted by Janet Tarbox at 23:33