Today has been a long day and we are tired. Since about 10:30 this morning, with a rest stop, another for fuel and a quick lunch of a pizza slice and a 1.5 hour snarl on I-78 behind a hideous accident requiring a HazMat team, numerous fire trucks, two wreckers for the remains of a tractor and its trailer, we have been on the road. About 10.5 hours and 600+ miles. Some people might say that getting there is half the fun. I'm not too sure. Both travel by air and by car is pretty tiring. For most part, though, we have done well, making only two slight wrong turns and getting to and through New York City with surprising ease.

I don't think we have ever willingly had such a late start in the face of an unusually long day. All it took was an invitation from Alana and Colin to Tal ...

We were up at about 6:00, just after dawn. The showers and hot water were sublime. (We arrived back at Chewonki last night late enough that we had to choose between showers and supper, and food won.) Breakfast was served in the dining room, where we gathered as a group for the last time.

Chewonki, as I think I have written before, has a semester program for high school juniors, about 40 students, who have a morning meeting immediately following breakfast in a large lounge on one side of the dining room. During the meeting a report of current, overnight events is presented by a student, reminders of field trip details are announced, and the like. I was sitting there pretty much in awe of the whole process and especially of that assembly of extraordinary young people and the adults guiding them. Colin took the opportunity to introduce our Elderhostel/Road Scholar group before the meeting ended, explaining what we had done over the course of nine days. To be honest, I felt some reciprocal awe ... 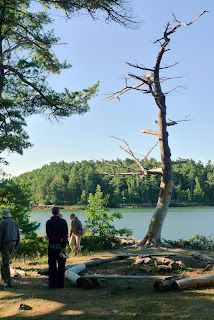 That was when Tal amazed me by not being in a hurry to set out for home immediately after breakfast. He took up Colin and Alana's invitation for a walk to The Point. It's a glorious location with about a 300-degree water view. While I cannot explain how deeply satisfying this experience has been, maybe our late start explains it better than words could.

After our return to main campus and when we could linger no longer at the picnic table under the apple tree where we had met for met each other over lunch together on September 5th, it was time to go, a moment that felt like ripping off a bandage. Despite the flare on the lens, I think this photograph pretty much says it all. 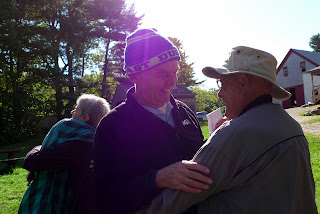 I am grateful for eleven days of association with these folks. Now comes the luscious process of mining the treasures of the experience in earnest.
Posted by Janet Tarbox at 23:18

Labels: goodbyes, I-78, Maine, The Chewonki Foundation, Wiscasset ME