Tal and I, wanting to fish in advance of the day's heat, were up early Saturday morning.  The pre-dawn was, indeed, cool, gloriously so.  To put aright the first bird's nest of fishing line I managed to make on the spool (grrr) my headlamp came in handy.

I didn't fish with my whole heart though.  The rising light was giving the sky shades of color that coudn't possibly be named and the clouds mesmerizing definition.  I set the rod and reel down frequently to take up the camera.

It wasn't until I began processing those images that I noticed something beyond the pretty morning and the fish on Satcher Pond.  It's disconcerting.  I take the same photograph over and over again. 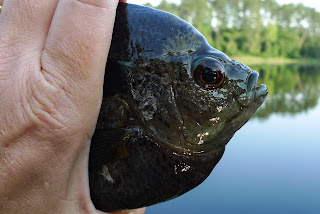 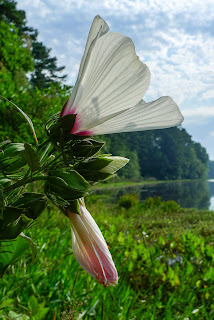 The subject of each image might be different, but it is the same pattern:  lower left to upper right, subject in the foreground, Satcher Pond in the distance, rule of thirds strictly employed.  Sigh.

I will make an allowance or two for myself.  To use the camera one-handed requires a finger of the right hand to depress the shutter.  So, the bluegill had to face left.  In the case of the swamp rose mallow, had I photographed the other side (1) I would have had to wade into the pond at least knee deep and (2) the light would not have illuminated the veins in the pedals or outlined the anther and stamens.

Those excuses aside, though, I'm wondering if I need to mix it up.

While we do read left to right, is that the way we see everything?  How hard would it be to make photographs the other way  -- upper right to lower left, for example?  Would it be as difficult as my using a pen with my right hand?  Might that adjustment slow me down, make me see as though through new eyes?  How would the images I moved from the sensor of the camera onto the computer screen be different?  Could the change of direction be confusing or awkward for the viewer?

Photography questions aside, I suspect I see life and produce opinions the same way I use a camera.  Perhaps I need to apply my questions to more than the way I compose an image.
Posted by Janet Tarbox at 14:57