It's not what you think.  I'm not having a meltdown kind of a day.

My brother shared a photograph on Facebook.  That's what set off this one-thing-leading-to-another line of thought.  The title of the image is "Ice Cream!"  So, the title of the post could be nothing else, could it? 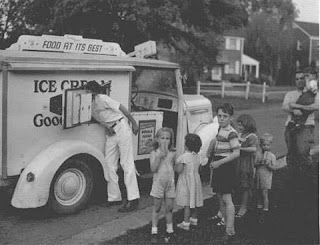 My siblings and I didn't grow up with this being a sight we beheld or an experience we had often. But, when we visited Mom's parents in Milford MI each summer, we came to recognize the sound of the ice cream truck long before it appeared.  I'm thinking "Turkey in the Straw," blaring tinny and ever closer.

Most evenings after supper thin dimes (how many depended on how many grandchildren were present) appeared on the kitchen table.  One for each of us.  That's all it took in the late 1950s.  Waiting on that paved driveway (a big deal to my mind, a paved driveway) was such a time of anticipation.  An ice cream truck just had to be one of the wonders of the world!

Children have their own wonders now.  I'm too out of touch to know what they are.  But, I hope some old photograph -- in whatever form images take, say, 50 years from now -- or a few bars of a song will transport them back to a simpler time the way this fuzzy picture did me.

I returned to a sweet scene in my memory -- the street where my grandparents lived and where my mother grew up, a street where there were other children to play with, a street where, even though I was a visitor, I felt known and welcome.

I returned to a moment of sterling security when the sight of dimes on a kitchen table equated to permission, to invitation and to unquestioned love.