More than meets the eye

This photograph of Lake Erie was made in the early afternoon from the mouth of the Welland Canal at Port Colborne, Ontario.  Most of the day had been overcast, but not gloomy.

I don't know what I'd expected the view of Lake Erie to be when we exited the canal.  Probably sparkling, bright water, high billowing clouds in a clear blue sky, lovely houses dotting the shoreline.  Whatever those expectations, an expansive wall of grey had not been among the options I'd considered.

I stood on the upper deck for a long time -- watching, straining my eyes -- having trouble distinguishing the horizon line.  The occasional ship in the distance was a help.  I made several images, wondering what I'd get and how the various shades of blue grey would be seen by the camera's sensor.

It was only this week that I began looking at the photographs from that day.  Pretty subtle.  Lots of layers of grey. 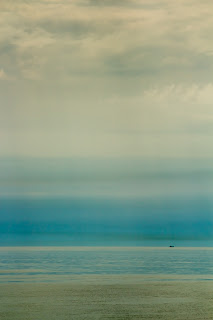 As I began developing the image, however, lovely things began to happen.  Normally, I wouldn't push the post processing quite so far, but, oh, the intricate colors and textures that emerged.  The nearest water looks a little like a beach (which it isn't).  There is a ship out there.  The clouds are a bit billowy.  I especially like the wisps of cloud descending on the right side.  Clearly, the camera saw more than I did.

How often that is true.  And, not only the camera.  I simply don't see.  I can stand on deck, as it were, looking, watching, peering into the gloom -- seeing nothing, thinking "there's nothing here."

I so it with ideas.  I do it with people.  Dismissive.  Because ...  Because of what?  Hair style, grammar, interests that don't jibe with mine?  Without benefit of interaction I seem to feel free to categorize, to judge, to exclude.  Snobbish and conceited, without doubt.  I almost despair thinking about it.  But, I also understand that my tendency doesn't have to be absolute.  Seeing, seeing differently and deeply, is my choice, a choice I can -- and even sometimes -- make.

This image, however over processed, reminds me that there is more than meets my oftentimes haughty eye.  There are layers and colors.  There is depth and interest.  Almost always, there is much to learn and to appreciate.