Not until the local evening news did I have any idea of the honor held by the third Sunday in July. With six hours still to go before the day ended we jumped right in. Spoons poised. 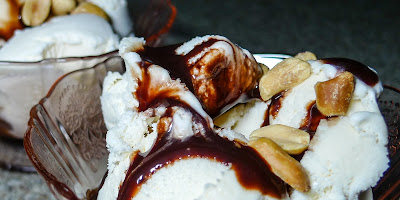 Seems Ronald Reagan's sweet tooth was not limited to jelly beans.  He declared the third Sunday in July to be set aside to honor ice cream.  Who knew?  In fact, the entire month of July is ice cream month!  I'm pretty far behind, it being the 15th already.

According to NBCNEWS.com it's also National Gummi Worm Day and National Tapioca Pudding Day.  Do you see any photographs of those two delicacies?  We're letting those two go.  Completely celebrationless.  Not making any promises -- not even a maybe -- for next year either.  It's ice cream or nothing.
Posted by Janet Tarbox at 20:49