Tuesday was a tough day.  Facing the truth is oftentimes very hard.

In the conclusion to my post that day I wrote this:

All I really want to do is ... feel proud of the handful of images that are really good -- and there are a few.

This what I am talking about. 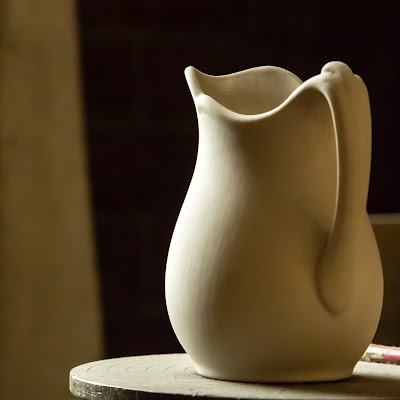 A pitcher. Yes.  Part of an exhibit at the Erie Canal Museum in Syracuse NY.  That, too.

Are there things wrong with the photograph?  Yes, again.  The object is too close to the right edge.  There's a paint brush on the flat surface along with the pitcher.  I could go on.  But ...

What's right?  For me?  The way the light falls on the pitcher.  And, on the left edge of the handle.  AND, along the closest rim.  It seems to glow.

I like the curve of the pitcher, the out of focus curtain letting the viewer know the proximity of the window.

It's all about the form.  The curves and the light.  The actual object could be anything and it could be anywhere.  Why it's part of an exhibit in a museum in Syracuse doesn't matter at all.  (A good thing since I recall none of those details.)

An image can extend a experience.  I am satisfied.