We have done it again. Reached the point where the sun is as far from the celestial equator as it can get. Winter began today and Tal and I are leaving shortly for a holiday party. It's already dark and cold; the temperature tonight promises to drop dramatically. 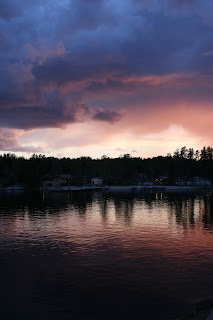 The last time this happened the sun was at the other end of its eliptic course. On the first day of summer we were at Shining Falls Lodge in Manitoba and the day seemed to go on forever. This photograph was shot at 10PM after we had returned to camp as a powerful storm brewed.

These six months have gone by in a flash.
Posted by Janet Tarbox at 17:47