It's taken all week, getting two simple artificial wreaths up on the new gates at the head of our driveway. The mission of finding the wreaths themselves took a chunk of Tuesday. From place to place I trooped. Perhaps I should more accurately say from place to place I drooped. Most that I found were two small, each gate being nine feet wide and requiring something substantial. A few, not ideal but that would have done, were too expensive. The search ended at Lowes with 36-inch blanks (meaning, I learned, undecorated), an extra bonus being that all the Lowes Christmas merchanize had been marked half off at Thanksgiving. I worked at adding bows last night in a tangle of wide, wired red ribbon and Tal and I attached them to the gates this afternoon using very handy "cable ties" which he had found at the local hardware store. 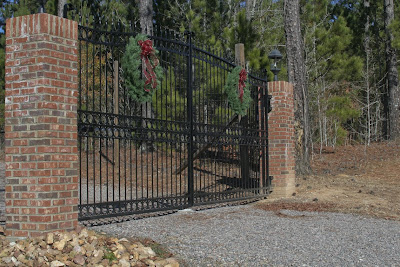 While I am pleased with our efforts, I have managed not to become overly invested in the greening of the gates for this holiday season. When Tal asked me last night if I were going to put anything beside the bows on the wreaths, I gave him the same line I gave myself on Tuesday as I made checking price tags a priority during my search, not wanting to like too much one -- a pair, actually, costing more than I wanted to pay. Let's be realistic. They won't last the season. We're not going to have to worry about storing them for Advent and Christmas 2009."

Our house is at least 325 feet from Country Club Road; the gates are not even visible from the garage or from the front door. I know we will likely be relieved of responsibility for those wreaths in the very near future ... if not by morning. Before all is said and done they will be appropriated, filched, made away with, pinched, purloined, ripped off, snitched, swiped, even stolen! in the dark of night.

What happens now will be OK. Any pleasure I experience on seeing them (that is, if I see them) as I come and go during the next few weeks will a bonus added to the pleasure of this day.

Today's newspaper, The State, included on its editorial pages a quote which might sum up the point I'm trying to explore.

What Tal and I did today brought me joy. That joy will not go away if the wreaths do.
Posted by Janet Tarbox at 17:15

Janet, your posts are wonderful! Thank you for your occasional and always insightful view into what Douglas Adams called "Life, the Universe, and Everything." As I am sure all who read your blog do, I read with the certainty that you are not talking with yourself, you are talking with me.