The trek to Eagle Rock

This day began the same way yesterday did: a 6:30 alarm, a 7:00 call home, a shower, breakfast at 8:00. After breakfast I tidied my little room and, sitting in the lobby where WIFI is available, gave e-mail about an hour. I felt productive and, when I closed up the computer, I felt finished. That’s one of my most persistent longings – to feel finished. So, today I know I have received at rare gift. I am grateful.

As lunchtime approached, I organized my photography vest with an extra camera battery, a polarizing filter, crackers, sunglasses and the “Kanuga Trails” map and began the trek to Eagle Rock via a trail known as Baldwin’s Reach. Although it is only about two miles from my room to Eagle Rock, over half of the way a steady climb, it took me nearly an hour to reach my destination. 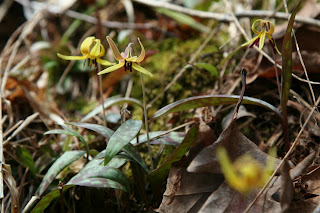 Other than not being a young as I used to be slowing my pace, along the way a melodious brook caught my attention, resulting in a slight detour to get closer to it. While I watched and listened to the water, gradually I became aware that I was surrounded by small yellow flowers tucked into the shade all around me. What a surprise; what a delight. Efforts at getting close enough to photograph them and at getting the exposure and light balance right seems to have paid off, though I did tramp away up the trail afterward with damp knees.

It was the sound of the water, though and not the flowers, that changed the way I walked today. I saw less and heard more: the whisper of the wind in the tall pines; the rasping clatter of the back-lit, fluttering, golden leaves still clinging to the limbs of the beech trees; the multitude of chirps, tweets and other calls of the birds along the path, which for most part I could not see.

With high thin clouds shielding the sun somewhat Eagle Rock's long views weren’t particularly noteworthy. But, to me with the persistent breeze providing a hushed sigh above and around me, it was the perfect place to spend some time. I had Elie Wiesel’s “Night” in the vest and I read -- with my back to a warm boulder -- for about an hour. The subject of the book, his account of being in a Nazi death camp as a teenager, conflicted with the scene in front of me rather dramatically, somehow making me experience both of them more intensely.

I returned to Kanuga proper on the northern arc of the Corn Mountain Loop, an old road which gave me much more stable places to put my feet than descending Baldwin’s Reach would have. All told … a three hour excursion, making for a really great day. .
Posted by Janet Tarbox at 20:19