What an afternoon. It had been a great day so far. I’d spent the morning working in the guest room and bath and we had had a Mexican lunch with good friends in Edgefield. Mid-afternoon Tal began hearing weather reports interspersed in the golf match he was following. The weather making its approach was, indeed, serious, but as the situation progressed the actual reporting was worth putting down the dust cloth to witness.

The entire weather team of a local television station was on the air; regular programming had been suspended. The up-front guy was in shirt-sleeves, the shirt itself remarkably rumpled, his tie loosened. Another man, his shirt crisp, cuffs buttoned and tie still snug around his neck, appeared in the scene from time-to-time to deliver just received telephone messages to the up-front guy. And, a third man, seen only in passing managed the computer images for up-front guy. Up-front guy was in heaven.

We watched satellite images from Columbia; we watched satellite images from Warner-Robbins Air Force Base; we switched back and forth between the two at a dizzying pace. We counted lightening strikes per minute. We learned about the “classic hook” echo, a sure indicator of a tornado. We followed super-cell thunderstorms down the Savannah River and west-to-east along I-20. Mobile home dwellers were warned to seek shelter elsewhere. Others needed to be ready with blankets and pillows to hunker down in an “interior-most” location. The WeatherCam panned the horizon, buffeted by wind gusts. The broadcast throbbed with urgency. 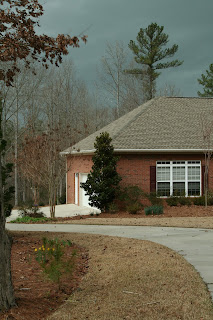 To his credit up-front guy repeatedly hoped aloud that their radio partner was preparing to take their reporting live. When the television station was struck by lightening, up-front guy made one final appeal for radio coverage, responding with relief and gratitude when he learned it had happened. Then, we lost the signal from that station.

Getting any photographs of the storms as one moved through and another passed to our southwest was difficult as we live in a something of a bowl next to Country Club Pond. I was predisposed to follow up-front guy's instruction not to be on the road. I have to admit, however, that being on higher ground between home and Edgefield would likely have provided some pretty dramatic sights.
Posted by Janet Tarbox at 00:05