One in the morning and another in the afternoon. Both in this northwest corner of Portland.

Forest Park, at 7.5 miles long and 1.5 miles wide and taking up 5000+ acres, looms up several blocks to the west of our hotel and was our morning destination. Maps don't seem available and the large sign at the closest park entrance was weathered and damaged to the point of uninformative. So, we walked in for 45 minutes, planning to retrace our steps. At the ruins of a stone house and just about at the 45 minute point, the path became an intersection. We chose to turn about 30 degrees back to our right and ended up meeting walkers and runners and finding ourselves -- miraculously in that pre-decided second 45 minutes -- back on the street map Tal was carrying.

It was a great hour and a half. The forest is dense and dark, expect in places where an occasional tree has come down. We saw the largest Douglas fir in Portland, spotted (and heard, raucous as they are) Stellar jays, enjoyed the soft music of a steam's late-summer trickle along part of the path. Completely unmanicured and with some 70 miles of trail, it's easy to understand why the neighborhood near the park is the most densely populated one in the state. What a backyard. 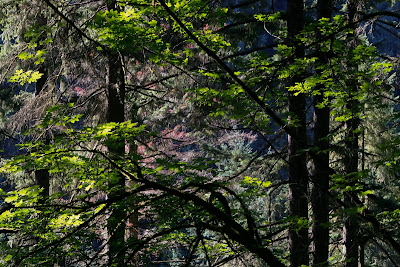 This view through the forest was one precipitating simultaneous comment. We stood and simply looked for several moments. The glow of the maple leaves against both the dead tree immediately behind and the grey/blue of the far side of the deep V carved out over the centuries by the steam gave this walk its flavor.

In midafternoon, my having read about a series of stairways leading from the flatland into the hillside overlooking downtown Portland, we struck out to find a view. Miles and miles later we'd seem some pretty impressive real estate, but never found ourselves gazing down on Portland and at Mount Hood some 70 miles away. The houses are pretty much shoulder-to-shoulder, maximizing use of each lot. No spot for a tourist's view. Of course, in that neighhorhood, let's be serious, who would want to provide that? The comings and goings, the tire tracks in the lawn, the McDonald's bags. Get serious. We know now that Washington Park or even the tram at the southern end of the waterfront is the place to go to "take in" Portland. Maybe tomorrow. 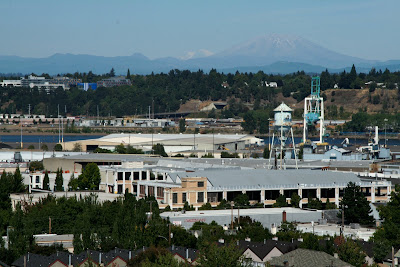 This hazy long range view, taken from a switchback in the street, shows Mount Saint Helens with Mount Rainer, snowcovered, in the distance.
Posted by Janet Tarbox at 19:30