Cape Perpetua and beyond

We checked out of the Driftwood Shores this morning, the fog still predominating the landscape, knowing it would be a long day. But, nothing on the agenda – at least speaking for myself – would we delete. So …

First stop: The Cape Perpetua Scenic Area where our guide took us on a walk through the temporal rain forest, where it did, indeed, rain. And, where, in spite of repeated storms wiping our signature trees over time, the trees we saw were magnificent. This photograph speaks better than I am able. 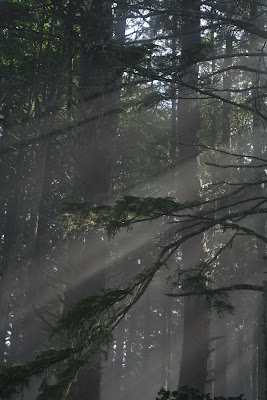 Second stop: Newport’s Yaquina Bay waterfront to embark on a Marine Discovery Tours boat bound (the well-publicized caveat being fog permitting) for the ocean and for certain the estuary. The fog lifted to the point that we did leave the harbor, seeing harbor seals and sea lions on sea walls and bouys, and several other boats. Larger life, like whales, were not visible. More interesting than the ocean, however, was the estuary where clams are being raised on floating platforms that look something like boardwalks, where bird life abounded and the sun actually shown. 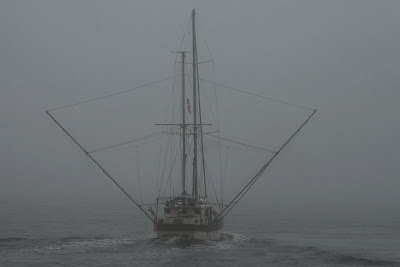 Third stop: Oregon Coast Aquarium (also in Newport) to enjoy the aquarium itself and to eat lunch. The aquarium is stunning, made all the more so when one learns it received for its construction and receives still for its ongoing life no public funding. It’s a testament to a community wanting something very badly and making it happen. We chose four areas to visit during the limited time we had.

1. Passages of the Deep, a tunnel through an ocean exhibit with 360 degree views, overhead and underfoot. Wow.

2. An exhibit of Oregon coast photography by a local photographer (Scott Blackman), unique in his presentation on tile for some of his images (one shown here).

3. A temporary exhibit entitled Oddwater, featuring rather strange looking sea creatures in tanks along with much-celebrated locally blown glass. I know. You’d have to see it to come up with a mind’s-eye vision. Visible here is a fish, the name of which I failed to record, and its "matching" plate above, none of which is in very good focus.

4. The café where we really enjoyed a bowl of clam chowder with a nice chunk of artisan bread and Rogue Nation beer, brewed right across the street, an Oregon favorite.