By the time we arrived at Crater Lake, our afternoon having included a stop at Lava Lands -- part of the Newberry National Volcanic Monument, I was too tired to write a word, but arrive we did. Two fires are raging in the vicinity -- one a controlled burn (signs along the Rim Road read "Natural Fire Do Not Report") and the other larger, more distant and more serious. In fact, Highway 138 is closed and will necessitate remapping our route toward the coast tomorrow. Although the smoky conditions didn't allow us that initial zing of blue when we caught sight of the lake, it was nonetheless a powerful moment, that first look.

The inn is splendid. This is a photograph I shot right after supper of the lodge and the almost full moon rising. (I still haven't learned to take a photo and get the moon right. To our eyes it was large and golden.) 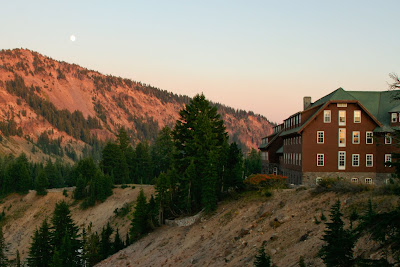 Our room is on the second floor at the end of the building, not counting the stone basement/foundation level. (Our windows are the two to the right of the door-length window, our second window almost touched by the eave where the roof of the annex meets the main building. Now, how confusing was that explanation?) I still cannot believe we're actually getting to stay here in the lodge, able to see the lake from our room, able to step out of the Great Room onto the terrace and sit in a rocking chair, sipping a glass of wine with the lake below.

Even though it was only September 12th, we arrived to find fires in each of the main floor fireplaces -- in the lobby, the Great Room and the dining room. The lodge's season is short -- mid-May to mid-October -- and it feels like the place is beginning to shut down. A comparison between the Timberline Lodge and here would be unfair. Interestingly, however, there is a telling phrase describing the lodge found in the Fodor's guide to Oregon: "beautifully renovated (but half-heartedly tended)." Maybe I don't need to say any more. Other than that to restate that I'm thrilled to be here. And, to add one more photograph -- also shot after supper from the same location as the one of the lodge, just in the opposite direction: Wizard Island at sunset.