Today we moved from the Holiday Inn Express in the northwest part of Portland to the hotel, the Hotel Vintage Plaza, where we will meet our traveling companions at suppertime tonight. So we could take advantage of a 10:00AM walking tour of downtown Portland, we were up early and, having eaten breakfast and packed at a conscientious clip, we were ready for the desk clerk to summon a taxi before 8:00. Although our room was not ready at that early hour, the staff tagged and stored our luggage and we were off to locate the assigned rendezvous point for the tour. 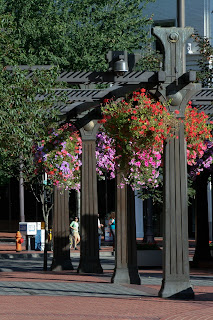 Over an hour early we people-watched in Pioneer Square, a beautiful, welcoming, multi-leveled city block, which had been a parking lot until relatively recently. A song popular at some point during my growing up years had a line about taking out a park and putting in a parking lot. Happily, Portland did the opposite with Pioneer Square. This photograph looks toward SW Broadway and the very popular coffee shop, a Starbucks, that is a vital part of the square.

It turned out we were the only two takers for the Tuesday morning tour, which was fascinating, but which required I pay attention and participate in the conversation. My plan to hang back and take pictures was shot from the getgo! From remarkable public art to the lightrail and bus system to the dedication to parks and street vistas, Portland is a great city to visit. I wouldn't be at all opposed to coming back.

Anyway, two and half hours and one and a half miles later, we bid Herb an appreciative goodbye at the park along the west side of the Williamette River. From there we headed to the lunch spot he'd recommended, Mother's Bistro, where we enjoyed the soup/sandwich special featuring -- get this -- sweet potato and chipolte pepper soup. Yum. Believe me!

When we returned to the hotel, our room was ready ... a spacious room on the fifth floor overlooking SW Broadway. Luscious. And, now it's naptime.
Posted by Janet Tarbox at 13:14