Getting from there to here

As Tal and I settled into our room at Timberline Lodge late this afternoon (check out our view), we challenged each other to put the day in order. It turned out to be nearly an impossible task, without resorting to consulting my notes, the published schedule AND a map. Our going from point A (Portland) to point B (Mount Hood) was an involved process.

Twenty-six in number (23 “scholars,” our group leader and a driver, plus the guide for the day) we left Portland bound for the Columbia River Gorge National Scenic Area. Though the early morning mist had not burned off and our view of the Columbia from the Portland Women’s Forum Park was limited, the riverside highway itself -- Highway 30, designed by Sam Hill and completed in 1916, is a work of art. By the time we reached the Crown Point Vista House, a very short drive from the Forum Park, there was plenty of river to see, not to mention the Vista House itself, an expensive, ornate, octagon-shaped highway rest stop built in 1918. 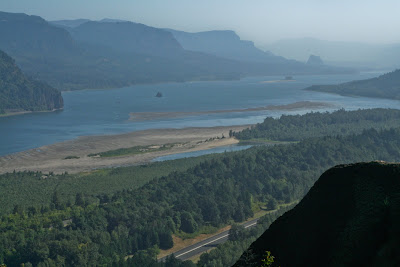 Our series of stops -- the ones Tal and I couldn’t get in order and which I’ll not list here -- included Multnomah Falls' spectacular 600+ foot drop, complete with an observation bridge partway up the falls, easily reached by a paved pathway. All the falls along the historic highway are inviting, and I understand that many Portlanders make a point of hiking to all of them. 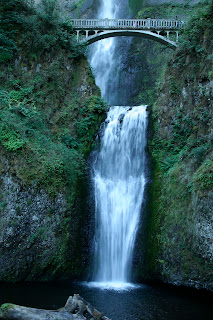 Our onboard guide was great, especially in that he managed to hold in balance the always competing, oftentimes hostile, interests all vying for primacy in the Columbia River Gorge. He’s employed as a park ranger with the US Army Corps of Engineers based at the Bonneville Dam and is an active member of and volunteer with the Columbia Gorge Ecology Institute. Although he contributed to our discussions through the day, he was in his element during our afternoon stop at the dam, a visit way too short and limited to the fish ladders and the below-water level fish viewing area. 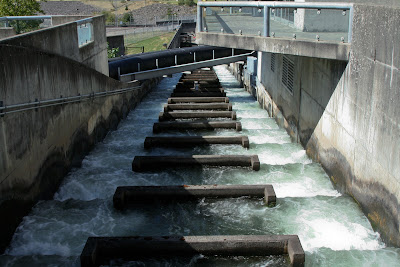