Passage to the coast: part one

As I returned our key cards at the desk this morning, someone asked about the expected date for snow at Crater Lake. After the clerk advised us that they avoided using the "S" word, she said most certainly by the end of the month. Hard to believe, with the leaves not yet having turned and the shirt-sleeve warmth during yesterday's boat tour.

I was up early today, partly out of sadness at leaving this spot and partly because I wanted to try for an early morning photograph -- not so much the sunrise itself, but the effects of the sunrise. Once outside I was absolutely delighted to find Mount Thielson in dramatic silouette against the coloring sky. For the past two days it had been nearly invisible, lost in smoke and haze. Perhaps I don't have to confess that it took great discipline not to be late to breakfast. 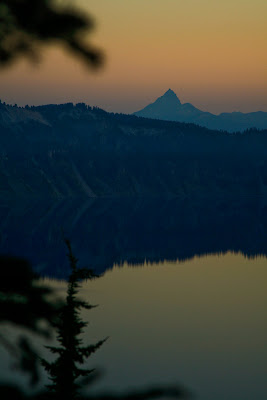 The two forest fires stayed contained over night, but had grown more smoky, making our drive away from Crater Lake lacking in scenic views. We travelled through the Williamette Pass in the Cascades, stopping near Oakridge for a rest stop at a park on the Williamette River. Tal was taken by the large leafed maples and, ever optomistic, tucked a couple seeds in his pocket to plant in Edgefield.
Posted by Janet Tarbox at 17:30