The camera is out of sight, but the photographs are here in the computer. You only thought I'd be quiet for awhile.

Oregon bridges are a huge part of the memories Tal and I are taking away today as we return home. Our study leader has been great about pointing the historic bridges out to us, the first one being the day we moved from Mount Hood to Crater Lake. That was the day (due to operator error) that I overexposed every image I shot. The photographs of High Bridge over the Crooked River, near Terrabone, are way beyond salvagable. You can see what I mean if you look back to one of the posts on September 12th.

It's a lovely span, 300 feet above the basalt gorge. The new bridge (2000), called the Crooked River Bridge, was constructed to compliment the original (1926) and far enough away from the High Bridge to ensure those both bridges can be admired.

It's the coastal bridges, though, that stood out for me.

This is the Siuslaw River Bridge (1936) at Florence. We had a bit of free time with almost two hours for lunch, so Tal indulged a walk up to the bridge level (old Florence is below the bridge's approach). 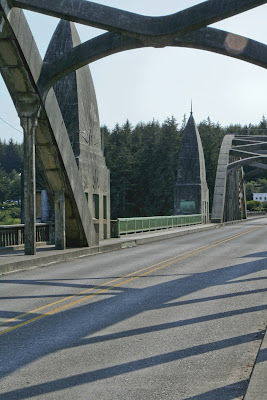 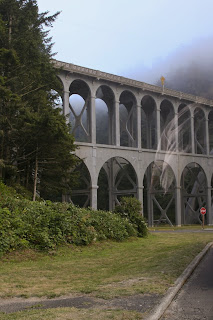 The foggy evening we went to Heceta Head for that georgous dinner at the B&B in the lightkeepers house, our coach parked under the Cape Creek Bridge (1932) and a smaller coach took us in two groups up onto Heceta Head. Not wanting to be one of those irritating camera people almays making folks wait, I simply took my luck from inside the shuttle. Just driving over this span, way above the ground, one would never know how dramatic -- and Roman aqueduct-like -- it is.

Between Heceta Head and Newport we crossed four additional bridges, but alas, there was just enough time to acknowlegdge the fact. The giveaway in three cases was a small brown sign Historic Bridge. Not a whole lot of help, but kept me from noticing too late.

According to our study leader only one McCullough bridge has had to be removed, one of the four I counted as we drove north. At Alsea Bay the sand used for the concrete was local and may have contained too much salt, the concrete not holding up over the years. The new bridge (1988), generously, honors the earlier span with a similar, graceful profile. 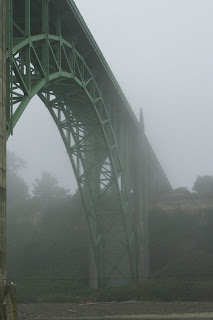 But, then came the Yaquina Bay Bridge (1936) at Newport. What a winner! And, even better we crossed it three times and went under it twice on our boat ride into the ocean and the estuary. It's truly a work of art and boasts beautiful stairs for pedestrians at each end. 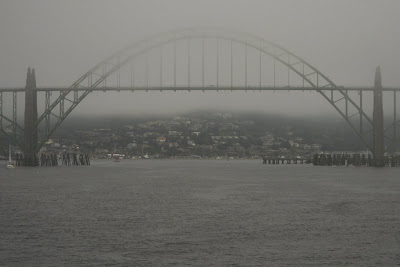 Two more between Newport and Lincoln City, marked by the familiar brown sign. They're both short and we passed over them quickly. Would I like to take a road trip to see every McCullough bridge on the coast -- and inland?

No need to ask. You know what I'd say.