Today's major activity for those who were able was a boat tour of Crater Lake, which took the better part of the day. From the lodge getting to the parking lot and trail head for Cleetwood Cove involves a 16 mile drive on the Rim Road and it was with some trepidation that most of us boarded the coach, all of us having been warned about the trail -- a 1000 foot drop in 1.1 miles.

The hike on the very dusty trail down into the cove was not particularly difficult, other than having to pay attention to the rocky footing on the narrow, switch-backed footpath and being mindful to stop walking while looking at the lake. Much of the smoke had dissipated over night, so the air was more clear and the view very enticing. This is my first sight of the boat dock from near the top of the trail.

The tour involved two National Park Service employees: the boat captain and the ranger who offered excellent commentary. And, the vessel in which we road was an amazing craft, high-sided, the passengers (perhaps as many as 30) seated low, our shoulders coming just below the level of the sides. Photography was a bit of a challenge both from that position and coupled with the constant vibration of the engine. For a fast shutter speed to reduce shake and knowing I didn't have to worry about depth of field, I set an f-stop of 4 and zeroed out the meter. Not my finest effort, but acceptable. This image shows the layer of smoke we were fortunate enough to be under during our time on the water.

The two hour tour ended, then began the hard part, but we both made it. Slow and steady was our mantra. We weren't the first to arrive back at the Rim Road, but we weren't the last either. In the end we were away from the lodge for almost five hours. We rested a bit and attended a presentation by a summer intern on the restoration/rebuiding of the lodge and on her specific work inventorying and assessing the condition of all the stone masonry in the park. We opted out of a trip to Mazama Village for supper, instead indulging in a glass of wine and an appetizer by the fire in the Great Room and a sunset walk before retiring for the night -- before 8:00. Yes, we are pretty tuckered out!

Here's one last photograph, an artistic shot of the setting sun's light on the east rim cradled in a frame of tree roots and tree trunks. 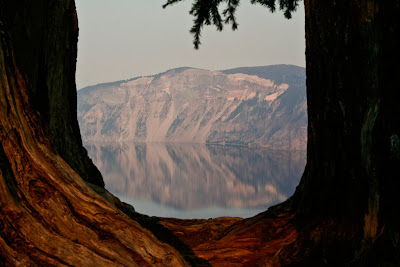