Yesterday afternoon and evening was simply spectacular. And, when I opened our drapes at 5:45 this morning to see what my early morning walking weather was going to be like, I was instantly grateful that I'd stayed out until the sun was below the horizon and the ship had regained its prominence just off shore. 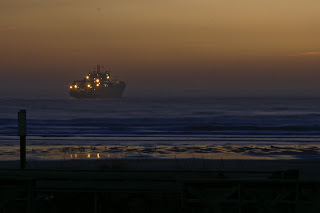 Was the ship still out there? No telling ... nothing but grey, damp, drifting fog right up to the hotel windows. There would be no walk. At breakfast we learned the truth about the ship. No spying going on. No intrigue. It was laying fiber cable from Alaska and down the west coast to Florence, our hotel being its most southern installation site.

As breakfast was ending, our instructor for the next two days arrived, a science professor (mostly geology and biology) at Kent County Community College and a woman passionate about the Pacific northwest. (She also taught at the University of Georgia at Savannah GA before moving to Oregon.) From the North American plate moving westward, the Juan de Fuca plate subducting under the North American plate and the Pacific plate sliding past NNW along the Juan de Fuca plate to the tusanimi zones along the Pacific coast and constant preparation for the earthquake that is coming, she lead us to understand a rather clear and fascinating truth: scenery is geology.

After the entertaining introduction to the area it was off to the Oregon Dunes National Recreation Area. The volcanic basalt headlands running from Florence north prevented moving sand from accumulating. As the sand moved south it found haven at the end of the headlands between Florence and Coos Bay, and area about 40 miles long, forming dunes that go up to two miles inland. As the fog cleared ever so slightly we boarded a large dune buggy and toured some of the dunes (many -- not the ones we road -- nearly as high as some of the headlands). Not something I would ever have chosen to do on my own or to propose it to Tal, but it was fun, like riding a roller coaster on big, bouncy wheels.

The delicate balance and steady dance of the dunes is currently threatened by a European sea grass introduced in the early twentieth-century to hold the sand in place. It has a deep and spreading root system which is holding the sand too well, fostering development of a forest behind the front dunes and tapping the aquafer, and, like kudzu in the American south, impossible to irradicate. The buggies of all sizes that ride the dunes are the most effective limiter to the spread of the grass than anything else that has been tried. 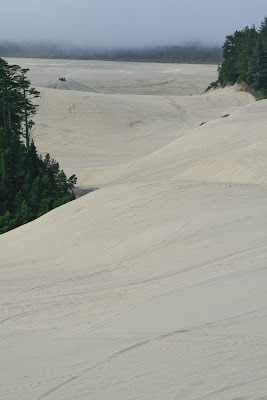 Let the demystification continue!
Posted by Janet Tarbox at 14:14