Plan A had been taking in the Kumquat Festival in Dade City.  (Yes, there IS such an event; check out the link for details.)  After a breakfast of sausage and pancakes we were off in two cars -- knowing, in general terms, where we were going.
Well, turns out the Kumquat Festival is a one-day, Saturday-only event, a detail not quite made clear in the newspaper article that got us interested in the first place.  We toured the center of Dade City, noting carefully stacked street barricades, row upon row of porta-johns and almost empty streets.  We weren't alone in our confusion; others like us cruising through town stopped pedestrians who shook their heads and gave us the bad news.  No kumquat smoothies for us this year.
Instead, we had an energetic lunch at Moe's.
It was a good afternoon for photography both outside and in. 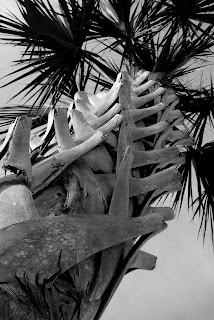 Tal and I walked back to Alex's school where the palmetto trees have been carefully dressed.  This image is pretty in color, but I like the way the black and white treatment allows the spiral of the outgrown fronds to show.

During the late afternoon the sun cast shadows, thanks to the vertical blinds, almost the length of the living room. 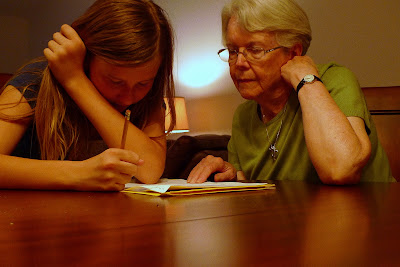 And, before the start of the Pro Bowl, Mom and Lizzie tended to Lizzie's music homework.  Given a 4/4 time signature, they worked out note and rest values and even wrote properly conposed measures.  In fact, they were supposed to tap their feet and sing some of what they wrote, but both drew the line at that bit of instruction.  I don't want to sound melodramatic, but I think Dad would have taken sublime pleasure at this particular sight.
Posted by Janet Tarbox at 21:43